A COUNTRY house hotel and restaurant in the heart of the Trossachs has come on to the market.
Creagan House, which dates from the 17th century, is said to have been “sympathetically restored and modernised”.
There are a total of six en suite bedrooms, five of which are currently used as letting accommodation.
The main entrance leads to a reception hallway where a residents’ lounge and the “baronial-style” 30-cover restaurant can be accessed. 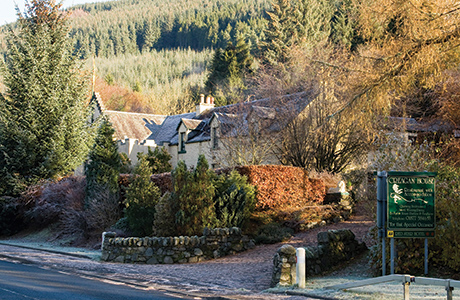 In addition to a twin bedroom on the ground floor, there are four en suite bedrooms on the first floor, including two double rooms, a four-poster double and a king size room.
Owner’s accommodation is located at the rear of the property and comprises a large double bedroom and an office area.
There is also a guest car park and various outbuildings, with the site said to extend to around 0.7 acres.
The business, on the A84 between Callander and Balquhidder, is situated around a quarter of a mile to the north of the village of Strathyre.
Property firm Strutt & Parker, which is selling the freehold for offers over £450,000, said the new owner could boost business by extending the restaurant’s opening times.
A spokeswoman said: “The business is currently run by a husband and wife team with the assistance of two part-time staff and operates five days a week, closing on Wednesdays and Thursdays throughout the year. Due to the owner’s near-retirement, the business has reduced its trading days, particularly during winter months.
“There is significant potential for new owners to increase trade considerably.”