HOTEL group Carlson Rezidor is to operate a new Radisson Red Hotel in Glasgow.
The 176-room property, next to the North Rotunda, SSE Hydro and SECC, will be built by Glasgow-based Forrest Hotels and open in 2017. 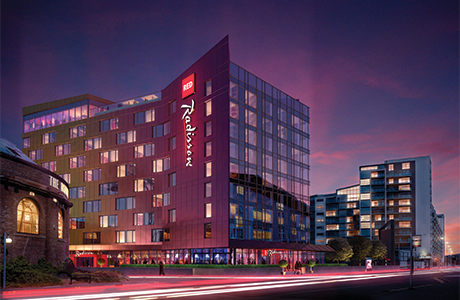 The Radisson Red will comprise a ‘Redeli’ restaurant, a ‘Oui’ bar, a gallery, meeting spaces and a gym. It will be operated by the Rezidor Hotel Group, which already runs the Radisson Blu and Park Inn by Radisson hotels in the city.
Wolfgang M. Neumann, president & CEO of Rezidor, said: “Glasgow is one of the strongest markets in the UK and Radisson Red will add a vibrant new concept to the city’s hospitality sector.”
Marc Finney, head of hotel and resorts consulting at Colliers International, which provided a market and financial feasibility study for the new hotel, said: “It is an excellent location and the product, being the first of its kind in the UK, will set a new standard in the city.”