While burgers and steak are still favourites, diners are increasingly buying into food from far-off lands

BRITS are looking abroad for meal choices when eating out, according to the latest report from foodservice consultancy Horizons.
While burgers and steak still appear on UK menus more than any other dish, the new Menu Trends report reveals that Middle Eastern, Mediterranean and Vietnamese cuisines are increasingly influencing choice. 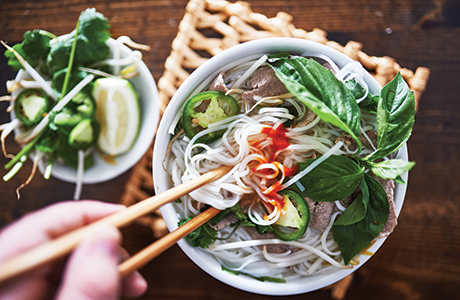 And among the ingredient trends identified in the report is the wheat-free, grain-like quinoa, the use of which is said to have doubled on menus since winter 2014, appearing in dishes at the likes of Hilton, Nando’s and O’Neills.
South American seeds, including amaranth and chai, are also said to have become more widely used, especially in breakfast and dessert dishes.
Horizons analyst Nicola Knight said: “Many of these trends have been picked up and adapted from street vendors and small independent operators, particularly the more innovative, easy-to-eat hand-held dishes.

“It’s clear that operators are working hard to offer customers something new and interesting, often including so-called super-food ingredients which satisfy diners keen to eat healthily.”
The twice-yearly survey revealed that Mediterranean-inspired dishes are on the up, with kebabs 50% more likely to be listed on menus compared to last year, while skewer-grilled souvlaki is also more widely served.
Houmous alternatives, including the Greek skordalia which is made with garlic and pureed potatoes and favetta which is made from broad beans with olive oil, are also being used more, the report said, while halloumi has seen a sharp rise on menus, up 54% year-on-year with Mexican chain Chiquito featuring halloumi-stuffed mushrooms and Wetherspoon listing a dish of grilled halloumi.

The report also highlighted the use of popping candy in more dishes.
“The use of the mouth-exploding popping candy has hit the mainstream in both sweet and savoury versions – including in a burger,” said the report.
“Bella Italia, Zizzi and Revolution all have dishes on their menus containing popping candy.”
Knight added: “In 2010 it was virtually unheard of, but its use has grown 170% year-on-year as operators look to add some novelty to dishes and give their customers something to talk about.
“The trend was started by celebrity chefs such as Heston Blumenthal to offer their diners a taste and sensory experience.”
In other menu trends, beef burgers are said to be up 41% since summer 2014, although their average weight has decreased; and rib eye and fillet steaks have risen in popularity despite a rise in price and a decrease in weight.

The report said chicken burgers and vegetable burgers are up 73% and 20% respectively year-on-year.
Reflecting diners’ demand for a taste of the continent, brioche is up 67% since last year and is increasingly served with burgers and hot dogs.
The language of menus is said to be changing, too.

The report says that the use of “ethical terminology” in describing dishes has risen 10% in the last year.
The use of gluten-free descriptions is said to be up 23% since winter 2014 and 63% of operators use the words ‘allergy’ or ‘allergen’ on their menus, up 4% since winter last year, according to the report.