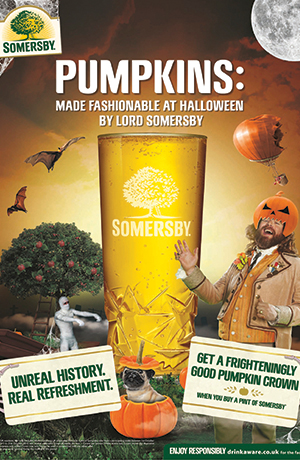 Lord Somersby is getting dressed up for Halloween.
The character at the centre of the cider brand’s advertising is to feature in an on-trade promotional campaign in the lead up to and during the fancy dress festival.
A Halloween POS kit containing branded bunting, posters and drip mats has been developed for distribution to participating venues.
And drinkers buying a pint of Somersby will be able to claim a pumpkin crown.
They will also be able to use the mobile app, Blippar, to take selfies with Lord Somersby in a variety of frightful surroundings by pointing their smartphone at one of the drip mats. Consumers can then share their pictures on social media.
David Scott, director of brands and insight at parent company Carlsberg, said: “We know that people enjoy spending time in pubs and bars during Halloween, and this campaign aims to help operators maximise this fantastic opportunity.
“Lord Somersby has been exceptionally well-received since we launched him to the UK market at the beginning of this year, and we are confident that he will have no trouble engaging pub-goers again throughout autumn.”
Lord Somersby made his TV debut in two ads earlier this year; the character also appeared at summer music festivals including Download and Wireless where he welcomed festival-goers into his ‘high-energy manor house’, which featured bars and a DJ.
The activity is part of a £7 million promotional spend for Somersby cider in 2015.