The right to refuse has again been in the press as a result of an English case where a gentleman was refused service in a bar in Cornwall; the staff were concerned he was under the influence. It transpired that the gentleman has a form of facial palsy and, as a result, claims were made that this could be a form of discrimination.

The law in Scotland is that a licensee, and by extension their staff, has the right to refuse entry or service at their discretion. This is so long as they do not do so on a discriminatory basis.

The underlying case law on refusal, which still stands, has a long history.

The law on discrimination, namely the Equalities Act 2010, imposes a number of protected characteristics which are:

If a publican refuses entry because of a disability, then that is discrimination.

But, if a publican refuses entry because of a legitimate and reasonable belief that the person is under the influence of alcohol then in my view this is not discrimination.

If it transpires that the person does have a medical condition, then that was not the reason for refusal – the belief the person was drunk was.

There are a number of conditions that can present similar symptoms to inebriation. This could be in physical appearance or in other ways such as slurred speech, awkward movements and so on.

I know someone who has multiple sclerosis and I know from personal experience that the limits this illness places on her could be interpreted as someone who is under the influence; such as balance issues, difficulty with walking and sometimes stumbling over words. Refusing someone in this context can cause them great embarrassment. 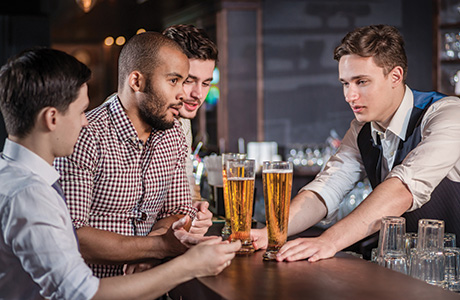 A refusal should always be handled carefully and with diplomacy.

But the licensed trade has to abide by the law that applies to them and this imparts a legal duty to refuse someone if you believe they are drunk.

To sell alcohol to someone who is drunk is, after all, a criminal offence.

There are a number of recent discrimination cases where claims have been won against licensed premises, for example hoteliers who have refused to honour bookings for gay guests. Hoteliers argued that it was against their religious beliefs to allow a gay couple to share a room.

But, correctly in my view, the religious belief of the business owner is irrelevant.

They are offering a service to the public; they cannot discriminate as to which sections of the public may or may not avail themselves of this.

A public house is not a public place and the public do not have a right to be in licensed premises.

They are there at the invitation of the licensee, and that invitation can be withdrawn.

In a case like the one in Cornwall, I sympathise with the gentleman and can understand how embarrassing a refusal can be in this context.

But, in my view, the staff acted correctly. They have a supervening duty to uphold the licensing laws and had a legitimate belief that they were refusing not because of a medical condition, but because they believed the man to be drunk.

There was no discrimination if the intent was genuine and lawfully based on their legal obligation to refuse service to someone they believed was drunk.

• Stephen McGowan is partner and head of licensing (Scotland) at TLT solicitors.

A plan to keep spick and span

Licence fees could be next in line for change