The operators of Glenhead Tavern used their experience to open The Twisted Thistle in Old Kilpatrick.

The owners of The Twisted Thistle have a long history in the licensed trade, so when the opportunity arose to buy another premises in the area, they jumped at it.

Run by Wendy O’Donnell and her husband Bob, the bar and grill in the village of Old Kilpatrick is the couple’s second outlet. 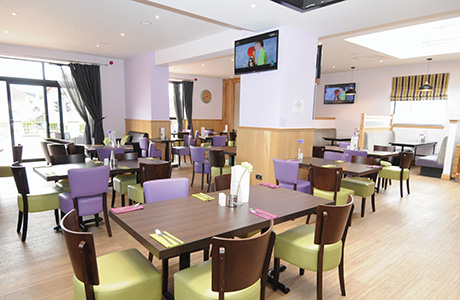 The O’Donnell family has operated Glenhead Tavern in nearby Duntocher, West Dunbartonshire, for more than 65 years, with Bob’s father having run the pub before Bob and Wendy took over.

It meant they already had extensive experience in the licensed trade by the time the former Telstar bar and restaurant came on to the market, giving them the opportunity to expand their portfolio.

“It was brewery-owned at one time, but then it became a free house,” said Wendy. “My husband formed a partnership with some of his mates when he heard it was for sale.

“Bob and his three partners made an offer for it at the end of 2013, but it wasn’t until November 2014 that we actually opened.”

The O’Donnells decided to give the venue a complete overhaul.

This meant extensive planning approvals were required before work could continue.

It also delayed the opening of the premises by a year as major changes to the fabric of the building and sliding floor-to-ceiling patio doors were sanctioned. 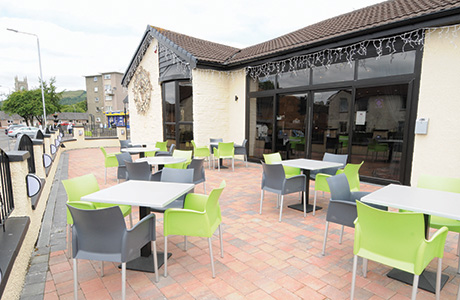 The structural work on the premises was carried out by Gmb Builders, run by Gregor Baillie, who is also one of the partners in the pub business.

A combination of sunken spotlights and Edison-style vintage filament lightbulbs were supplied by Star Lighting and further decoration carried out by David Barnes of David Barnes Decorating.

Before the refurbishment, which Wendy said cost more than £500,000, began the O’Donnells renamed the bar The Twisted Thistle after the Thistle Neuk area of Old Kilpatrick where it is located.

The name inspired a Scottish theme, but Wendy, who helped select the furniture and décor colour, did not want it to be overly Scottish.

“We thought we needed to reinvent the place and start from scratch,” she said. “We already had the Glenhead Tavern, but for here we didn’t have any regulars or anything.

“We had to find out what people in the area were looking for before we started.”

After some market research Wendy had an idea of the kind of colour and materials she wanted to use in the bar. 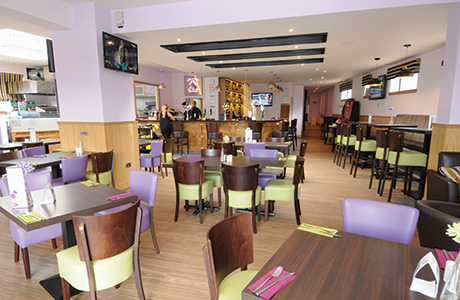 She said: “It was me that picked the colours and the fabrics.

The refurbishment included the installation of a series of roof skylights in the main bar, which allows natural light to highlight the laminate oak floor, plain white decor and lilac feature walls.

A variety of seating options are provided, including purple leather and striped fabric booths on one side of the venue and brown leather tub seats accented by lilac or lime on the other.

These options are complemented by dark wood tables and chairs where customers can watch dishes being cooked in the newly-installed open kitchen next to the oak-clad main bar.

At the granite-topped bar, a collection of chocolate brown leather bar seats provide an additional seating area, where customers can enjoy the sights and sounds of the open kitchen.

A corner of the pub near the 200-capacity venue’s large patio doors showcases an exposed brick wall and living flame fire.

The fireplace feature, a set of antlers on the wall and the bar’s celtic thistle logo – which was designed by Bob O’Donnell – are subtle hints of the Scottish theme. 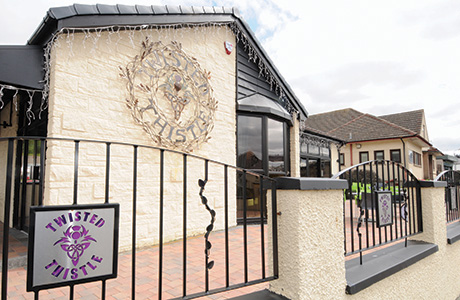 The thistle is repeated several times inside the premises and is a prominent feature on a lilac wall at the entrance of the bar.

Leather seating next to the fireplace looks onto large glass sliding doors that open into a large outside patio area.

The patio terrace is surrounded by black iron railings which each have a metal plaque bearing the purple Twisted Thistle design.

Wendy said the terraced area, which offers more tables and brightly-coloured seating, is a major attraction among customers.

“The outside area is very popular because the patio is a bit of a sun trap, so it gets very busy on sunny days,” she said.

All the kitchen equipment was supplied and fitted by New Concept, which advised the team to install an oven after seeing the outlet’s menu – which majors in pizza and pasta dishes as well as other bar favourites such as nachos.

Customers can also choose from a range of coffees and an afternoon tea and cake menu is also offered.

The food operation is led by a team of six chefs supported by 19 bar and waiting staff.

“When we opened, we thought the business would mainly be driven by wet sales, but it has turned out to be predominately food-led,” said Wendy.

Many of the team’s food suppliers are the same companies that work with the Glenhead Tavern. They include Reids Food Service, Top of the Hill Butchers, Fresh Direct and M&J Seafood.

The wet side of the business, meanwhile, is serviced by Dunns Food & Drinks and Nichols Dispense.

To the rear of the venue is a 100-capacity function suite which is used for christenings, funerals and wedding functions. It also has a small corner bar while high-backed chairs and landscape paintings expand the lilac-coloured theme from the main bar.

A range of “flexible seating” is provided on the mezzanine level that can be arranged in different formations for functions as required.

Wendy did not know how locals would react to the bar after its extensive refurbishment.

But she said she is thrilled with the response of customers, who have embraced the changes.

She said: “They are absolutely loving it. For a building that sat for 15 years untouched, it has now completely changed.

“Most of our clientele come from the local area, but we now get passing trade from hikers and hillwalkers.

“It’s been a lot of work, but I’m delighted the refurbishment has been a great success.”