A Pub and hotel operator in Dumfries and Galloway has encouraged other licensees to get involved in an industry training scheme after hiring one of the graduates full-time.

Speaking to SLTN, Jayshree ‘Josh’ Rough said Diageo’s Learning for Life programme, which provides training and work placements to young unemployed people, is “one hundred per cent a good thing for the trade”.

Josh, who runs five outlets across Dumfries and Galloway, hired Learning for Life graduate Vikki Leach after Vikki completed a two-week work placement at one of her venues, The Wigtown Ploughman Hotel.

“I think [Vikki] realised from early on that it’s not just about standing behind the bar and polishing glasses, it’s about being a part of the team,” said Josh.

“Sometimes you’ve got to go into the kitchen to help wash up dishes if they’re backlogged.

“The fact she was willing to just go with the flow and be part of the team was really what endeared her to me.”

Josh became involved with the scheme after being invited to an event promoting the programme.

She agreed to host three of the students in her venues as they completed their work placements.

All three had already undergone four weeks of training.

She said the placements were a helpful recruitment tool for the outlets involved.

“When you do the placement you can have an assessment of someone over two weeks, rather than taking someone on, trialing them for a few days, and it’s great for the first few days while they’re impressing you, and then when you offer them the job it all goes to pot,” she said.

“It doesn’t happen that way [with the students], because in the two weeks they’re on the placement they’re just there to learn, not to impress you, which is when you find out what a person’s really like.”

And Josh encouraged publicans elsewhere in Scotland to get involved with the scheme in their area.

She said: “[Licensees] have got nothing to lose. It’s a definite win-win situation.

“You do find the kind of people that will have a natural aptitude for working with the public, and sometimes you don’t get that when you’re in an interview situation with somebody.

“I’d definitely recommend other publicans and hoteliers to take up this opportunity. 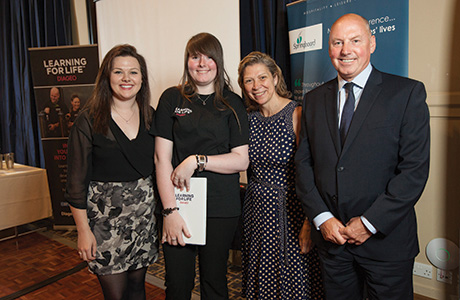 “It’s to their benefit.”

The programme also seems to be of real benefit to the students.

Vikki was referred to Learning for Life by the Job Centre, but had been sceptical she would earn a place on the programme.

“I thought it would be a good idea but when I went to the interviews I didn’t think I’d get on the course, because they told me there were only a few places,” she said.

Though she lives in Newton Stewart, Vikki made the trip to Dumfries every day for the course, where she learned the basics of working in hospitality as well as an understanding of Scotland’s licensing laws.

She said the course covered a range of aspects of working in a licensed business, from working behind the bar to laying out and waiting tables.

But it wasn’t until she got into The Wigtown Ploughman Hotel that the lessons were put into practice – and the real hands-on learning could begin.

“Because each pub will do things differently, you learn how to do things theoretically, but it can be different when it actually comes to doing it in practice,” she said.