A Highland tourism business comprising four hotels and a medieval castle is on the market as the founder retires almost 40 years after he started the company with a single property.

Highland Heritage was established by Ian Cleaver in the mid 1970s with the Royal Hotel in Tyndrum; he went on to grow the company into an £8 million turnover business, which uses its own fleet of 16 coaches to bring tourists to its Royal and Ben Doran hotels in Tyndrum, and Dalmally and Alexandra hotels in Oban. 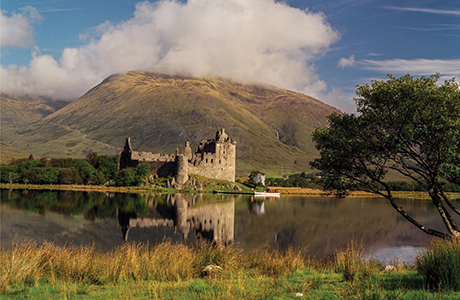 Cleaver also owns Kilchurn Castle – the 15th century seat of clan Campbell – on the banks of Loch Awe, which is currently managed by Historic Scotland.

The entire business, including Kilchurn Castle, the coaches and the freehold of the four hotels, which total more than 400 bedrooms, is on the market.

Colliers International director Alistair Letham, who is handling the sale, described it as an “extremely rare opportunity to acquire a large, self-sustaining business in the Highlands”.

“With a number of high quality properties that are in tune with their spectacular surroundings, a fleet of coaches and a huge database of satisfied customers, Highland Heritage is an extremely highly regarded and successful business,” he said.

“To sell it with an iconic Highland landmark such as Kilchurn Castle is the icing on the cake.

“Mr Cleaver is a somewhat legendary business figure in Argyll, who built the company up from scratch, so the buyer will be following in illustrious footsteps.”

Highland Heritage Limited is for sale by way of the entire share capital of the owning company; a sale of the assets, as a whole or individually, would also be considered.