The journey towards the opening of Raffaelle’s Italian Kitchen & Bar started when a unit adjoining his Romy’s & Family chip shop in Bearsden became available for rent. 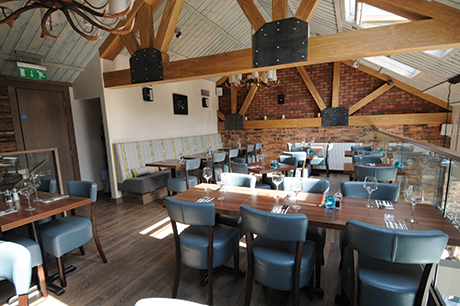 Initially, the businessman planned to open a delicatessen in the former clothes shop. But the plan changed when a second unit also became free, allowing Ralph and wife Laura to pursue their ambition of opening a restaurant.

The Scots Italian, who has another two chip shops in Dumbarton and Alexandria, was successful in negotiating a deal to lease both shop units and secured permission to join them together, creating space for the restaurant.

Raffaelle’s opened in June after a six-month refurbishment which involved extending the premises and installing a new open kitchen.

The restaurant is arranged over two levels with a bright seating area on one side of the ground floor and the bar on the other. Upstairs, a mezzanine level with skylights provides further seating with an emphasis on light which floods through large street-level windows.

“Our background is in chip shops,” said Ralph. “But this is our first venture into restaurants so we are still learning and still finding our feet and what works. It took a lot of work to get it ready for planning; it’s been about six months in the making.” 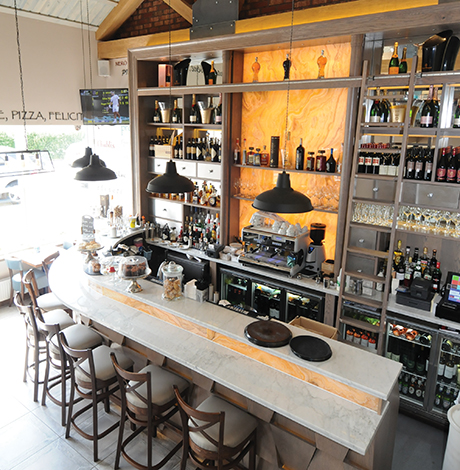 The move into the restaurant trade was not made blindly. Ralph’s cousins already run the La Vita restaurant group and advised the couple about the best way to go about it.

Many of the initial ideas for Raffaelle’s stemmed from Laura’s interest in interior design. Inspiration was also gathered from eateries elsewhere until they were able to clearly define what they wanted to achieve.

A bank loan from the Clydesdale Bank helped finance the £500,000 project, which in turn secured the services of building contractor Hugh Stirling and interior design firm Burns Design.

“Me and my wife did a lot of research,” said Ralph. “Laura has a very, very good eye for interior design and a lot of the ideas came from her.”

The downstairs area gives the impression of being open, but it also has secluded areas and pockets of the restaurant which provide more privacy for diners. 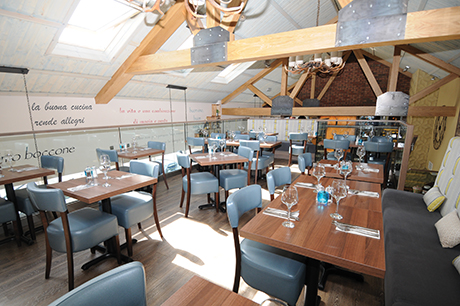 “There are sections that can be private and intimate where you can sit with family and friends,” said Ralph.

“It’s all done with the intention of making it seem private even though it’s open.”

The marbled bar area, with carefully crafted back-lit frontage, meanwhile, is equipped with high stools where customers can enjoy an espresso or glass of wine while enjoying the buzz of the open kitchen.

A back-lit mosaic staircase leads to the mezzanine level where a rustic wood feature wall leads customers to the next level.

The upper floor has an industrial flavour which is highlighted by an exposed brick wall and chunky wooden roof trusses reinforced by riveted steel plates. The original metal trusses were covered with oak by building contractors, which softened their appearance. 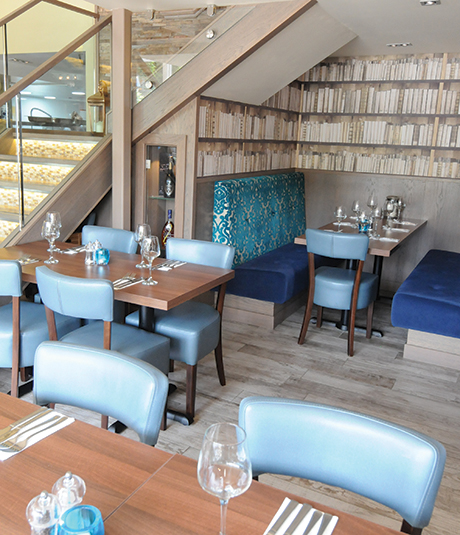 In total the restaurant is said to employ around 20 workers, including a team of five kitchen staff who provide a range of contemporary Italian dishes in a constantly changing menu.

The restaurant works with a range of suppliers including Urban Grocers (fruit and vegetables), John Vallance (fish and seafood) and ABR Quality Food (meat and poultry).

On the wet side of the operation Ralph uses Finom for wines and Inverarity Morton supplies both wines and spirits.

Between them they provide a range of whites, reds, sparkling wines and Champagnes for the Raffaelle’s drinks lists.

The restaurateur is clearly delighted to have opened Raffaelle’s doors after six months of intense work transforming the two units. But he insisted he could not have done it without the help of his wife, family and friends – including Nico Simeone of La Famiglia, who helped him design the kitchen.

He is confident there is a market for the restaurant in the Bearsden and Milngavie area.

But he is anxious to secure repeat custom because the restaurant has just opened its doors.

He said: “The future plans are just to get his place up and running. If you look after your customers and give them a good experience they will come back for more. At the moment, we are the new kid on the block and everyone wants to try us.”