In the depths of the historic Caledonian Brewery the gentle bubbling of secret beer recipes can be heard.

But it’s not coming from the main Victorian brewery, where well-kent ‘heritage’ beers such as Deuchars IPA, Flying Scotsman and Edinburgh Castle are brewed.

The innovation is taking place in a small section of the building where a ‘pilot brewery’ will create up to three beers a week. 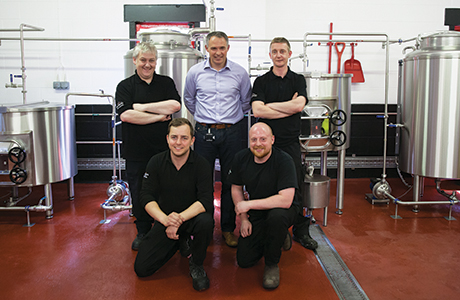 It’s the latest chapter in Caley’s long history and is the brainchild of managing director Andy Maddock and operations manager Craig Steven.

Maddock told SLTN the £100,000 microbrewery, which has a 400L capacity, will allow the company to experiment with different beer recipes before they are produced in the main brewery.

“I’m really excited about what we are doing and I believe in the guys that are doing it,” said Maddock. “It allows us to test and trial different recipes before they are scaled up.”

The pilot brewery is affectionately known as ‘Wee George’ after George Lorimer, who founded the main Caley brewery in 1869.

It is being operated by Heriot Watt University brewing graduates Peter Sharp and Ross O’Hara, who are responsible for trialing tastes and recipes.

In addition to Caley’s own suggestions, the pair are also tasked with creating a number of ‘wildcard’ brews of their own in four fermentation vessels.

“It’s a great opportunity,” said Peter. “The freedom we have been given has been incredible and the styles have come from all over the world.”

Maddock is also excited about Wee George’s potential, but he’s keen to give the duo a free rein and not restrict them in their efforts to create innovative new beers.

“From my point of view I want them to push the boundaries a little bit and in some ways I want them to make mistakes, because I want to challenge them,” he said.

“Our first brew was produced in June and ultimately we want to develop a modern craft range and are now working on two modern craft recipes.

“If we get good feedback, which I think we will, we will scale-up the recipes in the main brewery and if we get negative feedback we will change them.”

It is anticipated the first of the secret new brews will be produced in the autumn, available on draught and in 355ml bottles.

Maddock said the new equipment will allow the brewery to “remain fleet-of-foot in the market and help Caledonian enter the world of modern craft”.

“We’re thrilled that our new pilot brewery is up and running after 12 months of careful planning and a total investment of over £100,000,” he said.

The pilot brewery is said to have the ability to fill bottles of all sizes as well as cask and kegs, which Maddock said was a clear indication that the brewery is committed to bringing newly-developed products to the on and off-trade in the coming months and years.

The pilot brewery hasn’t been the only recent development at Caledonian.

The Heineken-owned firm previously received its hops in traditional hessian sacks, but the business now purchases the ingredient ‘fresh packed’, which Maddock said seals in the flavour and intensity of the plant.

One of the first brews to benefit from the full-leaf hops, which are imported from Bavaria, the Czech Republic and France, was Caledonian’s Three Hop Lager, which will shortly be bottled and made available to the on and off-trade.

“There’s been a real explosion in craft beer and we felt the time was right to do this now.”

And the brewery’s core range has not been forgotten.

The permanent beers, which include Deuchars IPA, had their recipes tweaked during a “12-month renovation” of the brewery’s heritage brands.

One of the brewery’s flagship ales, Caledonian 80/-, was also reformulated and renamed Edinburgh Castle in an attempt to appeal to a wider audience.

Maddock claimed the moves “ensured consistency across the family of brands” and strengthened Caledonian’s position as a “historic brewer of quality beers”.

He added: “We have always brewed by hand in Edinburgh with relentless inventiveness.

“Our team is certainly excited about being able to indulge in their passion for crafting top quality and original brews.

“We’ve invested heavily in our core range over the last year so now that we’re confident our premium traditional ales are at their very best, it’s time to get a little bit creative with our beer innovation.”