Rugby World Cup sponsor Heineken has been promoting the Dutch beer brand’s partnership with the tournament through a 100-day campaign celebrating the run up to the opening fixture on September 18.

As part of the campaign, which kicked off with the launch of a World Cup trophy tour in Edinburgh last month, Heineken has been providing pubs across the UK with a range of point of sale materials as well as a hints and tips guide to help publicans boost sales of premium beers during the tournament. 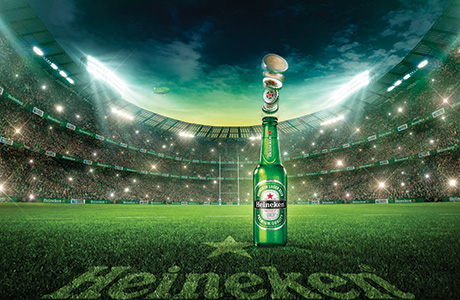 The campaign has also seen the roll out of 330ml Rugby World Cup bottles to the on-trade.

Heineken’s Rugby World Cup partnership is being supported by a national media campaign which includes print and billboard advertising as well as an online chat show hosted by the brand’s rugby ambassadors entitled the ‘Heineken Rugby Show’.

Andrew Turner, on-trade category and trade marketing director at Heineken, said the brand “has long been known for its links with world-class sporting events and we are pleased to continue the trend with the sponsorship of the 2015 Rugby World Cup”.

“The activity surrounding the tournament will give licensees the opportunity to increase sales whilst also positioning Heineken at the heart of premium social occasions,” he said.

“We are confident that experiential and promotional activity will excite rugby fans and will give operators throughout the country the chance to increase footfall and sales in the build up to and throughout the Rugby World Cup.”

Heineken’s Rugby World Cup campaign follows on from the brand’s sponsorship of the UEFA Champions League earlier this year.