Activity includes a significant presence at several UK music festivals as well as a promotion in the on-trade.

In addition to appearing at festivals such as Reading and Download, Lord Somersby will feature on point of sale material in selected on-trade outlets across the UK. 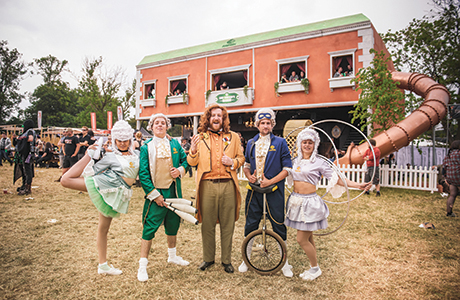 The material encourages consumers to take photos of Lord Somersby using the Blippar mobile app and pointing their smartphone at a bottle, font or the point of sale material itself.

They will also have the option of participating in the brand’s ‘real or not real’ quiz for the chance to win Somersby cider.

The Somersby character appeared at the recent Download and Wireless festivals, where festival-goers were entertained in the lord’s ‘manor house’ – a two-storey structure that included two bars serving Somersby cider and Tuborg lager.

At both events the manor house hosted live DJ sets and included an ‘apple chute’ attached to the side of the structure.

The manor will also be present at the Reading Festival in August.

“The festival activation and on-trade campaign have enabled us to drive brand awareness, whilst creating a platform for consumers to trial the Somersby range.”

Carlsberg introduced the Lord Somersby character earlier this year as part of a claimed £7 million marketing investment in the Somersby brand for 2015.