Ardbeg distillery celebrated its bicentennial with a royal visit from Prince Charles. 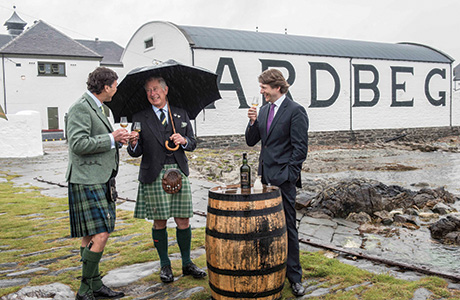 The Prince was shown an ‘Artbeg’ exhibition and heard about the Islay distillery’s plans to support the south Islay community with The Kildalton Project through its partnership with the Princes’s charity The North Highland Initiative.

During the visit, distillery manager Michael Heads explained the various ways the distillery has been celebrating its 200th anniversary year.

Marc Hoellinger, president and chief executive of The Glenmorangie Company – owner of Ardbeg – presented Prince Charles with a bottle of Ardbeg Kildalton whisky. He said: “The visit of His Royal Highness to Ardbeg gives great encouragement to the staff of the distillery, their families and the wider Islay community.”