Edinburgh restaurant Maison Bleue has been given a six-figure overhaul inspired by its North African roots.

The French-North African influence is immediately apparent as soon as you walk through the brightly-coloured entrance of Maison Bleue.

The laid-back atmosphere of the Edinburgh restaurant transports you to a different continent, seemingly leaving Auld Reekie far behind. 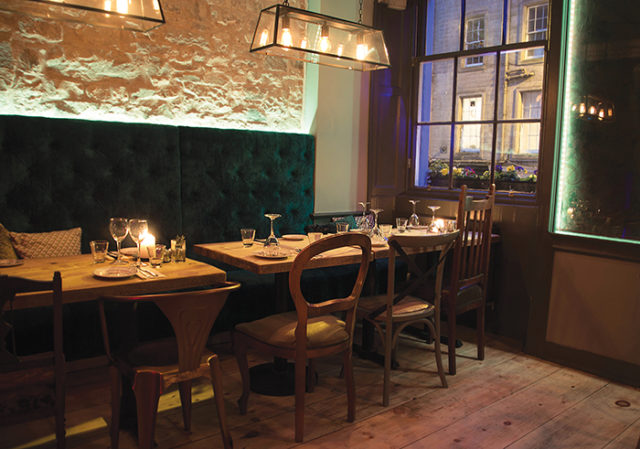 Owned by Algerian Scot Dean Gassabi and managed by his daughter Layla, the restaurant has been in operation since 1998 offering an eclectic mixture of French, North African and Scottish dishes.

Now the interior behind the distinctive blue-fronted façade on cobbled Victoria Street has been given a six-figure makeover which embraces the restaurant’s North African roots.

The self-financed refurbishment meant the restaurant had to close for a month while work was completed.

“It had been planned for a while,” said Layla. “But it was just about finding the right time when we could close the restaurant for a month.

“My dad spends quite a lot of time in Marrakesh and had all these ideas about brightening the place up and bringing in some North African influence, so that’s where the inspiration came from.”

Dean’s initial ideas for the restaurant were all brought together by Edinburgh interior decorator Grant Rough, of Rough Design, who created a mood board of colours, textures and materials to use in the refurb. 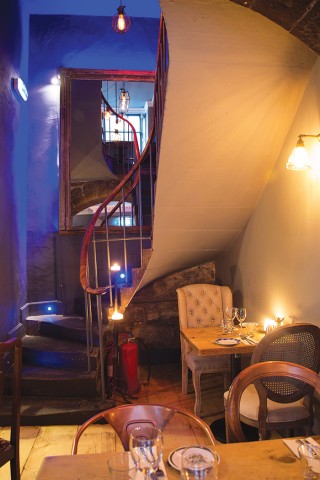 During the refurbishment, which was carried out by contractor SBS, the centuries-old building was stripped back to its original stonework.

On the split-level ground floor the original stone walls are exposed, which give way to grey and turquoise walls and Moroccan bleu majorelle wood panelling.

Antique seating and turquoise velour couches give a shabby chic feel to the venue, while mismatched furniture, vintage crockery and an array of North African trinkets add to the relaxed atmosphere of the ground floor eating area.

A spiral staircase leads to the second floor and one of the restaurant’s recurring themes, a red neon sign, is reflected in a giant mirror on the sanded wooden staircase.

Like the ground floor, it also has two levels and turquoise velour couches give way to lime green velour and mismatched vintage furniture on the lower level.

Climbing further up the staircase, a third floor accommodates the kitchen and the toilets, which are highlighted by red neon lights and Victorian mirrors.

“A lot of regular customers have come back and said ‘you have kept the chilled out atmosphere and the ambience of the place’,” said Layla.

“But we’ve also attracted a new clientele and made it more accessible to younger customers.

“My job was mainly to go and source the seating and all the chairs. It makes life a bit easier when the chairs and crockery are all mismatched because they don’t go out of date.”

Dean, who has plans to open more outlets in and outside Edinburgh, was previously involved in the construction trade and knew what to expect from the refurbishment.

He still cooks in the kitchen with his team of chefs and develops menus which are inspired by his North African heritage rather than following the latest food trends.

The changes, he said, were necessary because restaurants regularly need to update and evolve.

He also said it was important to keep customers interested without alienating long-term diners.

“I believe you have to give something back to the customer,” said Dean.

“The bottom line is the customers and if they don’t come back I don’t have a bottom line.”

The restaurant is said to have a regular clientele, which keeps returning for its Bedouin feasts, haggis balls, calamari and frog’s legs dishes.

The bulk of the produce is supplied by Campbells Prime Meats, while its mussels are sourced from Shetland by supplier Charlie McGhee and dried goods are from Edinburgh-based Mark Murphy & Partner.

On the wet side of the operation the restaurant has two main wine suppliers, Matthew Clark and L’Art du Vin, which between them provide a selection of Champagne, red, white and sparkling wines to match the eclectic menu.

In total the restaurant employs 30 staff with 12 people working in the kitchen as chefs and kitchen porters and the remainder working alongside Layla front of house.

“It’s a lot more satisfying having your own business and working for yourself,” said Layla. “You can go out there and work for other people or make your own fortunes.

“A lot of our staff have been here for a long time and maybe go away travelling, but they keep coming back and asking for their old job back.”