Spencerfield Spirit Company chose World Gin Day (June 13) to launch Seaside Gin, which includes locally-sourced seaweed in its botanicals and is said to have a “slightly sweet yet minerally flavour of summer at the beach”. The gin was handcrafted by head distiller David Wilkinson in collaboration with four postgraduate students from Heriot-Watt’s MSc in Brewing and Distilling, with which Spencerfield has a “knowledge transfer partnership”.

It is the latest in a long line of flavoured gins and gin liqueurs launched by Spencerfield in the five years since the inaugural Edinburgh Gin was released, and reinforces the firm’s ongoing commitment to “innovate and experiment” with new flavours and products.

It also underlines the ongoing expansion of a company which was set up ten years ago by Alex Nicol and wife Jane.

Back then, the firm, which takes its name from the family farm in Inverkeithing, Fife, had just two whisky brands – Sheep Dip and Pig’s Nose.

“We used to put the whisky in the back of a horsebox and drive to shows and fairs all over the UK, set up a stand and sell it,” said Alex, whose drinks industry career includes spells at Glenmorangie and Whyte & Mackay.

“We did that hand to mouth approach for a good four years.

“The whisky is our bread
and butter and allowed us to expand without carrying debt.”

The expansion saw the company launch its inaugural gin – Edinburgh Gin – five years ago, which has since been joined by a raspberry gin liqueur, an elderflower gin liqueur, a rhubarb and ginger gin liqueur, the 57.2% ABV Cannonball Gin, limited edition Christmas Gin, which was infused with traditional festive spices such as frankincense, myrrh and nutmeg, and now Seaside Gin.

And it’s not just Spencerfield’s range of products which has expanded.

Last June the firm opened the Edinburgh Gin Distillery beneath the capital’s Rutland Hotel; its staff has grown from seven to more than 20 in the past three years; it signed a distribution deal with Ian MacLeod Distillers two years ago; and it’s on track to post turnover of more than £3 million in the current financial year. And there’s more to come. 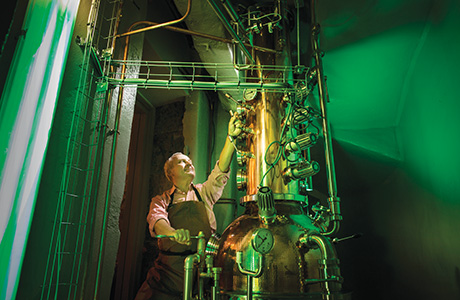 Spencerfield is set to open a £250,000 distillery in a former biscuit factory in Leith this August, which will see much of the production at its current site at Broxburn transferred to Leith; the firm will continue to operate the distillery in the city centre. Additional gins and gin liqueurs are also on the horizon.

Innovation is key, according to Alex.

“I think gin is very buoyant but I also think it can’t go on forever,” he added.

“What’s the criteria for survival? I hope it’s quality. We’re here to stay.”