A SMALL Scottish brewery named after Robert the Bruce is to bottle its ciders for the first time. 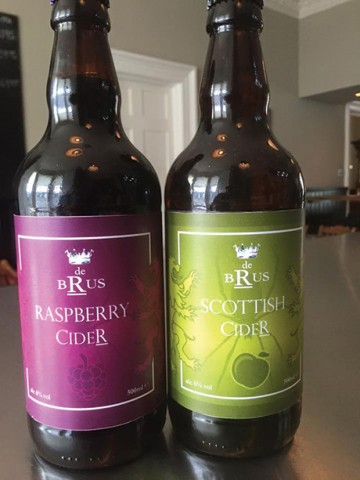 Independently-owned de Brus Brewery already produces a range of craft beers and ciders beneath its pub and function room, The Bruery, in Dunfermline, Fife, but this is its first venture into packaged cider.

The company is introducing a ‘traditional Scottish cider’ and a raspberry cider in bottled format.

It’s claimed the ciders have already been popular with the company’s customers in their original draught formats.

David Austin, director of de Brus Brewery, said: “Our two ciders have just been sent for bottling and should be launched in the coming weeks.

“We have a traditional Scottish cider and a Raspberry cider.

“Both of these are hugely popular on draught in the Bruery so we expect them to be in high demand in bottle form.”

The business, which launched in 2013, claims to have been the first independent brewery to open its doors in Dunfermline for more than 115 years.

The de Brus name, Austin said, is inspired by the ancient Norman name of Robert the Bruce, who is buried in Dunfermline Abbey 300 yards from the brewery.

Outwith the venue itself, the brewer has secured listings for its products at Edinburgh venues including The Kitchin and The Balmoral Hotel.

Austin said he has worked to promote the provenance and back story of the company’s beers and ciders.

He added: “Despite taking the brand onto Dragons’ Den we have funded the project entirely ourselves and retain our passion for the development of the products.”