ON Clentrie Farm near Auchtertool in Fife, the largest herd of water buffalo in Scotland can be found – and it’s attracting interest from the licensed trade.

The Buffalo Farm, which supplies buffalo burgers to Taypark House (see above), has been making its way into venues around the east coast and counts TV chef Gordon Ramsay among its celebrity fans. 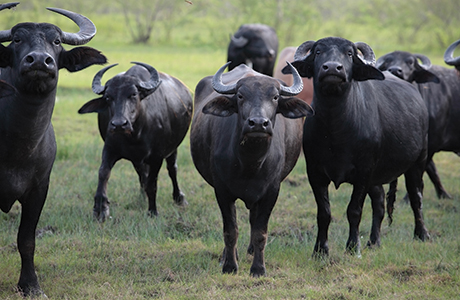 “We supply quite a few [venues] in Fife and Edinburgh – quite a few restaurants and health shops, particularly in Fife,” said farm worker Euan Sinclair.

Compared with beef from cows, buffalo is a healthy alternative, Sinclair said, highlighting the lower fat content in the meat.

“The big selling point is that the saturated fat is lower, which these days is the biggest attraction for some people,” he said.

The Buffalo Farm has been operating in Fife for just over a decade, but Sinclair said the farm’s main product, buffalo meat, offers a more traditional flavour due to the lower intensity of buffalo farming compared with the beef industry.

“It [tastes] very much like the original animal,” said Sinclair.

“It’s comparable to how beef would have tasted quite some time ago”.