It was the early 1980s when Jim Anderson first fell in love with full-flavoured beer.

The co-owner of The Anderson in Fortrose, winner of the 2014 SLTN Craft Beer Award, Jim was working in the kitchen of a Philadelphia restaurant when the bar manager offered him a post-shift beer.

“I’d never had anything like it,” Jim told SLTN.

“Then I went to get off my bar stool and nearly fell on my face.

“He’s laughing, he set me up. He said it was a Belgian beer called Duvel, which is 8.5% alcohol.

“From there it was like a curtain had lifted.”

What began with a prank became a passion, and Jim went on to publish a magazine, website and frequent articles on the subject of beer.

In 2003, he and wife Anne made the move to Scotland to, as Jim explained, “bring our son up in a nice environment with traditional values and a little less nonsense than we were experiencing where we were living”.

The Fortrose premises, newly renamed as The Anderson, had been trading for over a century before the family made the move, but Jim and Anne had big plans for the place.

Jim said: “The first job was to fix the food.

“It was the kind of food you see too much of here.

“It didn’t distinguish itself in any way from any other place.

“The other thing was to up the beer situation, starting with the real ale.”

While Anne – described by her husband as a “scarily talented” chef – overhauled The Anderson’s food menu Jim got to work on the outlet’s beers.

Cask beer and Belgian brews were the first priority, and the bar was soon stocking around 60 different Belgian varieties, while Cairngorm’s Wildcat was the first real ale on handpull. 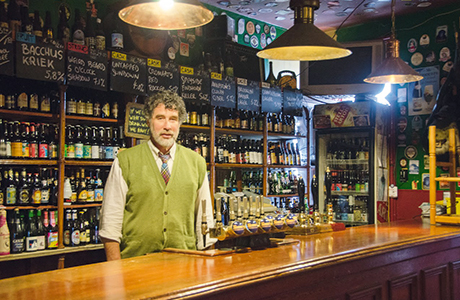 The beers are sourced from all over the world, and from a wide range of different breweries and suppliers.

Taking the time to seek out different suppliers is a vital step in differentiating any outlet’s beer offer, said Jim.

“If you do one-stop-shopping you’re going to end up with the same stuff everybody else has,” he explained.

“And then you’re competing on a different level – whether your bar staff has good craic, whether you put the heating on or any other thing that might make people choose one pub over another.

“We like to say that we have this very distinctive selection of drinkables and food that is going to form the basis for someone choosing us over another place.

“But we’re lucky that I’m a drinks freak and my wife is a good chef, because if that weren’t the case we’d really be up the creek.”

The range of beers at The Anderson is as broad as could be expected from a confessed “drinks geek”, but Jim is adamant that beer can hold its own against other drinks categories when it comes to the spectrum of flavours it can offer.

He said the flavours range from mild, Japanese spiced beers to “beers that you taste and you think someone’s hit you over the head with a chair”.

“The range of flavours in beer is so wide,” said Jim.

“People talk about wine this and wine that. We have a really extensive wine list, but you could take the range of flavours in wine and it would fit into the ear of the body of flavours you can find in beer.”

And while the beers at The Anderson come from all over the world there is a healthy selection of products from Scottish breweries.

In terms of Scottish-brewed beer the range includes bottles as well as craft in keg and cask beers – Highland, Cromarty and Brewdog are among Jim’s favourite Scottish producers – but not all the venue’s customers share Jim’s love for all styles of beer.

He said that while drinkers of craft keg or bottled beers will often try an interesting cask ale “the reverse is rarely true”.

“Rarely do my hardcore cask ale drinkers experiment with the kegged or bottled beers,” he said.

However, he stressed that the traditional differences between craft in keg and cask beers are narrowing thanks to European kegs that are capable of including live yeast.

The definition of ‘craft’ too, needs to be clearer, he said, arguing that there are many beers from around the world produced in large breweries that more than qualify for the term.

“Some of these beers are made in pretty big breweries,” he said.

“Where Duvel’s made, that’s a factory, and Leffe is made in a pretty big factory brewery, and Chimay Trappist brewery is pretty big.

“You’d be hard-pressed to say there’s not an overall sense of them being a craft beer.”

As someone who has been passionate about full-flavoured beer for several decades, Jim certainly isn’t a recent convert to craft beer.

And while he’s adamant that the current ‘craft boom’ is positive for the industry, he pointed out that there is still room for improvement. In Philadelphia, for example, restaurants will stock a range of quality beers in addition to a wine list.

“I think the UK is still a way away from that, so there is still room to move,” he said.