Swedsih cider Kopparberg is to be the subject of a major marketing initiative this summer which includes what is said to be the largest outdoor campaign for the brand to date.

The activity will see Kopparberg Strawberry & Lime promoted through a set of images produced by photographer Peter Rad and inspired by current trends for tattoos and body art.

Outdoor ads are set to appear at over 1900 sites across the UK and approximately 4000 commercial advertising posters. 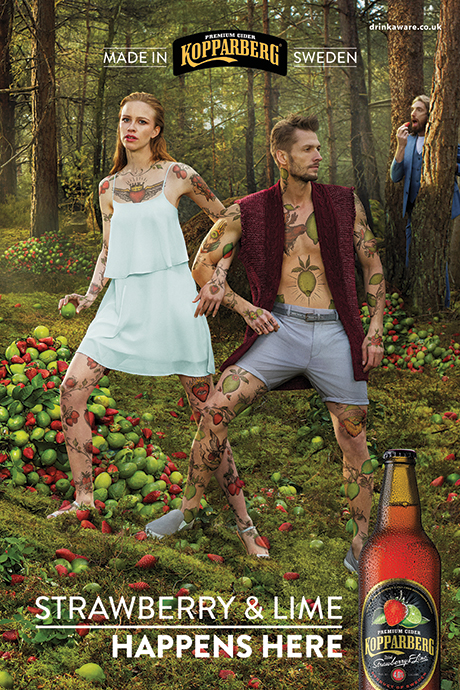 The seven figure marketing spend
will also include social media and digital campaigns as well as the
return of live event Kopparberg Urban Forest.

Returning for its second year, the Kopparberg-run pop music festival will take place for five weeks throughout June and July in Hackney Wick in London.

The full stable of Kopparberg products will be promoted at the event, including recently-launched Swedish beers Fagerhult and Höga Kusten.

This year’s event will also be accessible remotely as part of a partnership with online music streaming site Spotify.

A selection of audio set-lists from artists performing at the Urban Forest event will be available nationwide through Spotify.

Marketing support for Kopparberg’s Frozen Fruit Cider range will include press, digital and social media activity as well as the outdoor advertising.

A spokeswoman for Kopparberg said this year’s campaign follows the success of the brand’s ‘Elderflower Beards’ campaign from last year by taking “inspiration from trends rooted in tattoos and body art”.

“The idea evolves directly from the fruit cider ingredients – strawberries and limes – where vines of strawberries intertwine with refreshing limes to form tattoos over the bodies of male and female models,” she said.

“Inspired by the intricacy and talent of tattoo artistry, photographer Peter Rad captures a compelling aesthetic that is authentic, stylish, and very Kopparberg.”