Recent refurbishment adds another string to this Banchory hotel’s bow

A CAREER in the licensed trade has seen Douglas Arms Hotel owner Steven Ross travel a fair bit over the years, gaining experience in outlets from Edinburgh to Aberdeen and even across to the Alps. 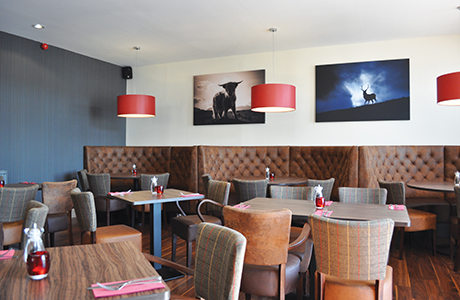 However, Ross has been settled in Banchory, Aberdeenshire, for eight years now, and he’s determined locals shouldn’t have to travel to find quality.

It’s this philosophy which prompted him to make some changes at the eight-bedroom Douglas Arms earlier this year.

“I wanted to save [customers] the 20-mile journey into town by creating the kind of offer that can be found in Aberdeen city centre on the Banchory high street,” Ross told SLTN.

“We figured there was a huge gap in the market and there were people here that weren’t being catered for.”

With this in mind Ross, along with business partner Scott Hutcheon and co-owner and wife Kirsty Ross, embarked on a refurbishment that has transformed the hotel’s reception and function room area into a new restaurant.

Between mid-January and March this year, the space was converted into a 96-cover restaurant, catering for both hotel guests and the public. 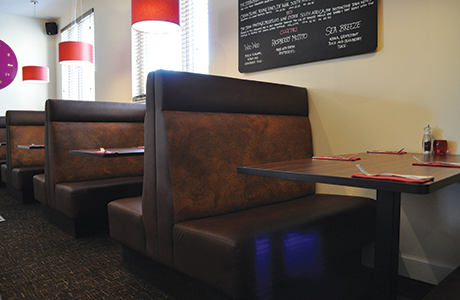 The refurb was no small task and included reinstating windows, raising the ceiling by approximately two feet, and dispensing with the venue’s reception area to allow customers immediate access to the restaurant.

The result, said Ross, is a modern venue, housed in a 19th century building, which adds another string to the Douglas Arms Hotel’s bow.

The design for the new restaurant is one which developed over the last eight years of trade at the Douglas Arms.

“Over the years you have an idea of what you think can fit in the space you’ve got,” said Ross, who added that the key to success was to work with the suppliers.

Ross worked with a number of firms to create the Douglas Arms restaurant, including contractor Deeside Construction; multi-service contractor Hutcheon Services, which was responsible for upgrading wiring, heating and lighting in the restaurant; plumber Raymond Burnett; furniture manufacturer BDP, which provided bespoke pieces for the restaurant; NU Style, responsible for new toilet cubicles; and Steven Reid Joinery, which built the venue’s new bar and gantry.

Ross commended the firms both for their work on the refurbishment and for being able to carry it out on a schedule that allowed the Douglas Arms Hotel to trade throughout. 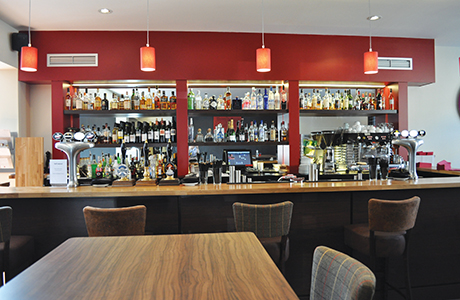 The hotel, which is said to benefit from business from Aberdeen’s oil industry, also has a public bar and was able to continue offering accommodation and serving pints during the project.

Ross said the revamp has modernised the venue, with the installation of bespoke furniture comprising regular and poseur tables as well as three semi-circular booths and four facing booths, all created for the venue by BDP.

The outlet’s drinks offer has also changed, with the new bar and gantry well-stocked with a larger range of premium spirits.

Douglas Arms wine and spirits supplier Inverarity Morton worked with Ross in the run up to the refurb, helping to build a range suitable for the new look venue.

On the food side of things, Ross said he was careful to find a balance, as the venue’s reputation for food is something he has worked on building since taking over the premises eight years ago.

“Food was a key thing when we got here to drive the business,” said Ross.

As a result, Douglas Arms head chef Steve Palmer has retained old favourites such as the traditional pub steak pie, but these are also joined by premium dishes such as seafood and lobster linguine and T-bone pork.

The overhaul seems to have paid off for the hotel, with the new look venue receiving a warm reception, through both customers’ praise and takings.

“It’s been really well received, trade has been through the roof,” said Ross.

“The weather has helped but a big night [before the refurbishment] would be 80 or 90 [covers]; we’ve been averaging 100 and we’ve done 200 on a Saturday night.”

The success of the changes at the Douglas Arms isn’t just good for business, it could be great for the local community too.

The hotel currently has 22 members of staff, but Ross said that figure is “going up as the weeks progress”, adding that he plans to take on an extra three or four full-time members of staff.