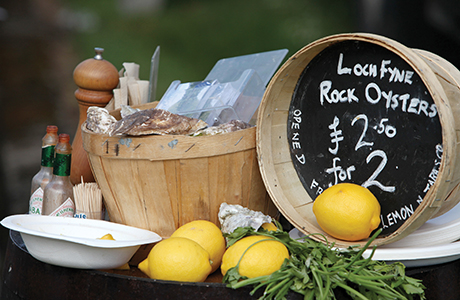 As Scotland celebrates the 2015 Year of Food and Drink, the country’s food and drink producers are set to take centre stage at the Royal Highland Show.

While Scottish produce has always had a presence at the event, show manager David Jackson said local food and drink has become a bigger feature in recent years.

And this year it is set to become even more significant as the Royal Highland Show rebrands its food and drink section as Scotland’s Larder Live.

“We will have in the region of 115 (food and drink) exhibitors,” said Jackson.

“There is a wide range of food and drink. A full range of meat products are on offer from traditional venison and pork through to gourmet pies and haggis.

Whisky, ice cream, fudge and chocolate producers will also be among the exhibitors at this year’s event.

Eden Mill will host a real ale bar at the show, while Heineken has pouring rights for the event.

In addition to the exhibitors, there will also be a number of food competitions, as well as a ‘cookery theatre’ featuring chefs from restaurants and hotels across Scotland.

Jackson said that the goal is to establish the famous agriculture show as a major food and drink event in its own right.

He described Scotland’s Larder Live as “the only food and drink show that has that direct connection between the farmer, the producer – increasingly one and the same – the retailer and the consumer”.

Jackson also argued that the event will be a useful destination for those in the catering industry.

“The show is a great place to find new producers and look at new products from more established companies,” he said.

“The new Tastings and Talks Theater at Scotland’s Larder Live will give you the stories behind the produce and let you test before you buy.”