MUSIC festivals are at the heart of a new summer campaign for Sourz.

The liqueur brand, part of the Maxxium portfolio, has joined forces with MTV, festival organiser Holi Festival of Colours and Capital FM to host a number of music events across the UK. The ‘Club MTV presents… Sourz Colours Tour’ will visit ten cities in total. 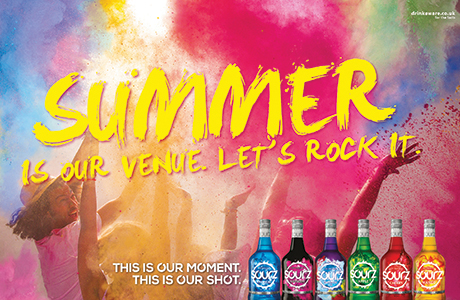 The TV campaign aims to reach 11 million 18 to 34 year olds and has launched on MTV and on the Sky network across TV, digital and social media channels.

There will also be an opportunity for consumers to win tickets to the Sourz Colours Tour in the UK as well as a Holi Festival in Europe.

In August, the partnership will continue across Capital FM (London) in an attempt to further drive awareness, competition entries and ticket sales.

Sourz will also be the ‘official shot partner’ of the Holi Festival of Colours in London at the Olympic Park on September 12 and 13.

Maxxium has described the activity as the “perfect fit” for Sourz.