Property for sale for first time in its 40-year history

[dropcap]A [/dropcap]HOTEL on the Isle of Barra has come onto the market for the first time in its 40-year history.

Located in Northbay on the north east of the island, near the main town of Castlebay and Barra airport with its beach landing strip, Heathbank Hotel was originally a church, or mission house, in the late 19th century. 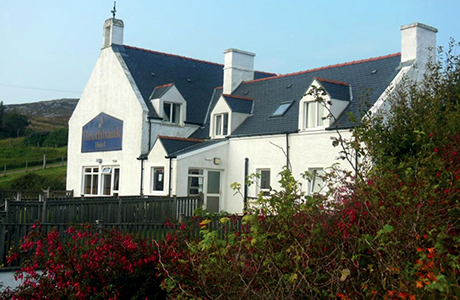 The property, which is said to have been used as accommodation by cast and crew during the making of 1948 film Whisky Galore, was acquired by the MacLeod family in 1974, who converted it into a hotel with bar and restaurant. Since then, the family has revamped and upgraded the hotel, including a major refurbishment in 2004.

The hotel is said to attract a wide range of custom from both leisure and commercial visitors to the island, which is home to what’s claimed to be the most westerly nine-hole golf course in Britain.

Colliers International director Alistair Letham, who is marketing the hotel on behalf of Joe and Kathleen MacLeod, who plan to retire, said the business currently trades from Easter until November, offering a new owner scope for expansion.

“Heathbank Hotel is a very well-established business, trading on a seasonal basis only, that provides an excellent and profitable living,” said Letham.

“This is the first time in two generations that the hotel has come on the market and represents an ideal opportunity for new family owners looking for a quintessential lifestyle business, on what has to be one of the most beautiful small islands in the UK.”

Heathbank Hotel is on the market with a price tag of offers around £375,000.