ONE of Scotland’s most northerly breweries is looking to build its reputation in the craft keg market with the launch of a new golden ale specifically designed for keg format.
Orkney Brewery will launch Orkney Gold, a 4.5% ABV golden ale, in 50-litre kegs next month.
Although the company has previously produced beer in kegs for local customers the new product marks the first time it has introduced a craft keg beer as part of its core range. It will be available to pubs and bars across Scotland.
Orkney Gold has been produced using American hops and Maris Otter barley.
“We’re still in the era of golden beers being very popular right across the spectrum – from male to female, young to old,” said Norman Sinclair, managing director of Orkney Brewery parent company Sinclair Breweries.
“And I think it’s the right style of beer to be sold all year round, as opposed to our Dark Island, which is more of a winter beer. 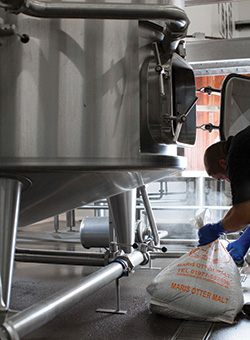 “We’ve put a fairly distinct hoppiness on this one – more so than any of our other beers. We’re going for people who are looking for something that tastes a bit different from what they are used to drinking.
“It’s got a bit more oomph to it.”
And Sinclair said that the ale should prove popular with a cross-section of different venues.
“It will appeal to a lot of different styles of places – from country places up north to places in the city centre,” he said.
“We’re not targeting one sector of the industry – like the young people who are largely into high-ABV, very highly hopped IPAs.
“We’re not targeting that market solely, we’re more trying to broaden the market.”
Orkney Brewery’s master brewer, Andrew Fulton, described the new ale as “intensely refreshing with lemon and black pepper bitterness, hints of pinewood and herbs”.
The finish is said to contain “a crisp but lingering resinous hop”, while the nose contains “soft citrus with notes of wood, spice and herbs”.
Hitting just the right balance in terms of flavour was vital, said Sinclair.
“You have to get the hop balance right if you’re going to make something that will suit a lot of peoples’ palates, because some of the highly hopped beers just don’t suit a lot of peoples’ palates at all,” he said.
“We’re hoping our balance isn’t far away from people who love hops to the people who are still a bit dubious about them.”
Orkney’s core range includes Dark Island, Red MacGregor, Northern Light and Skull Splitter – which was recently awarded a silver in CAMRA’s Champion Winter Beer for Britain competition.
All of those beers are available in cask and bottle formats.