REPRESENTATIVES from the Scotch whisky industry met with the Treasury to put forward their case for a 2% cut in spirits duty.

Members of the Scotch Whisky Association (SWA) are said to have discussed pressures on the industry caused by taxation, claimed to be close to 80% on an average bottle of whisky, with exchequer secretary to the Treasury Priti Patel MP ahead of the Budget on March 18. 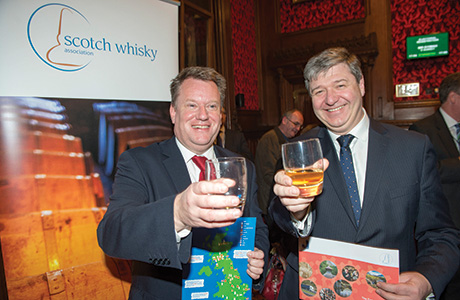 The SWA claims the Scotch whisky industry contributes almost £5 billion to the UK economy and supports more than 40,000 jobs; it says a cut in duty would further boost the industry and its supply chain.

David Frost, chief executive of the SWA, said the group had a “warm and constructive discussion” with Patel, adding that the minister “clearly understands Scotch whisky’s economic importance”.

“In the UK, Scotch whisky is under sustained pressure from taxation,” said Frost. “80% of the price of an average bottle of Scotch whisky is taxation and we hope the government will take on board our concerns about the negative impact of this onerous tax burden.”

The meeting with the exchequer secretary was accompanied by an SWA submission to the Treasury highlighting the industry’s contribution to the economy.