THE firm behind Havana Club rum has relaunched the brand’s Añejo Especial expression with a new recipe and packaging.

The new liquid, which was developed by master rum maker Asbel Morales, is made from a blend of aged rums said to create an expression with notes of vanilla and caramel and an underlying hint of tobacco, cinnamon and orange peel. 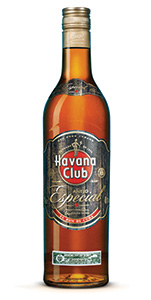 ial expression remains at 40% ABV but is said to have a sweeter taste profile.

The new-look packaging, meanwhile, is said to have been designed to increase stand-out on the back-bar with new features including a ‘handwritten’ font and oak barrel effect on the label.

Asbel Morales said: “At the Havana Club distillery in Cuba, we are continuously working on developing new recipes that will appeal to a wide range of rum fans around the world.

“The new Havana Club Añejo Especial has a distinctive flavour profile due to the unique production process we have adopted, whereby the rum bases are aged in white, young oak barrels before being blended and aged for a second time ahead of bottling.

“The influence of the barrel ageing is evident in the flavour profile with notes of vanilla and caramel really coming to the fore, which makes it an ideal base for Cuban cocktails, particularly the Cuba Libre.”

Adam Boita, head of marketing at Pernod Ricard UK, the firm behind Havana Club, said the new packaging will “help deliver a stronger product message and provide the brand with heightened visibility within the on-trade”.

“With this new recipe and premium look, we are confident that Havana Club Añejo Especial will satisfy demand from sociable young adults seeking a sweeter taste profile but for whom authenticity and high quality are equally important purchasing cues.”