There is plenty room for growth through new and existing products

For years now cider has been one of the best-performing drinks categories in the UK on-trade.

From the over-ice serve to fruit flavours and long-established British names to imported Scandinavian brands, the cider
field has a dynamism not many drinks categories can claim.

And yet according to research firm Mintel the category’s meteoric rise may have slowed during 2014, with volume sales expected to have dipped and the value of the category growing by only around 1%.

With cider having ridden high for so many years, the question must be asked: has the category finally peaked?

Glen Friel, sales and marketing director at Aston Manor Cider, said there is good news on both the packaged and draught side of cider.

“Draught cider continues to increase volume sales in the on-trade – a better performance than stout, ale and lager – and has delivered a three per cent increase in rate of sale growth,” said Friel.

“Packaged cider is the only format of beer or cider that is increasing distribution as retailers extend their ranges to satisfy consumer demand.”

And Martin Thatcher of Thatchers Cider said he expects pub customers to seek out ciders with provenance and quality.

“We expect growth to continue to come from apple ciders that offer authentic premium craft qualities, both on draught, and in the fridge – responding to this demand is where operators can really find a point of difference for their customers,” he said.

“By getting the range right, complementing the outlet, performance will follow.

“It’s the outlets where there is a choice of different styles of ciders, where publicans understand the profits that a genuine choice can bring, that are winning.”

In Mintel’s recent report the company cited the booming craft beer category as one of the factors having an impact on cider sales.

Graham Archibald, sales director at drinks importer Morgenrot, acknowledged that the popularity of craft beer has had an effect on cider, but stressed that this has been a positive development.

He said the craft trend has “helped switch the focus with many cider drinkers also now searching out smaller, more niche producers from the UK and around the world which showcase artisan techniques and drive innovation”.

“The craft beer movement has generated so much interest in different styles, tastes and production methods that it was only natural for the excitement to spread to the cider sector,” said Archibald.

This was supported by Gerald Michaluk of Arran Brewery, producer of Scottish Highland Gold cider.

Michaluk said that he expects that in the cider category, “like in craft beer, drinkers will become more discerning over time”.

“Craft cider and craft beer have a lot of cross-over and young drinkers are interested in both,” he added.

The cross-over between the two categories was also highlighted by Ben Turner, customer marketing manager at Kopparberg. 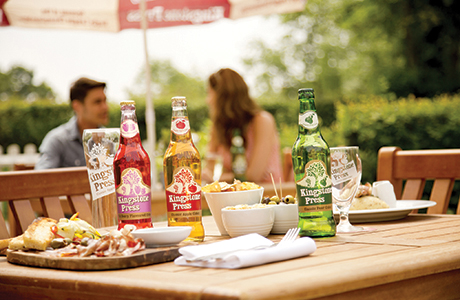 “Both categories attract consumers who like to discover new things, but the penetration of fruit cider continues the upward trend so there are no indications that it is losing consumers, with over 16 million UK adults now drinking it,” said Turner.

And innovation in the cider category continues at a rate of knots.

“The cider category is currently the same size as the wine category was 20 years ago, meaning that there’s unlimited room for innovation and creative thinking,” said Hugo Mills, director of sales and operations for Molson Coors.

As well as a stream of new craft and fruit ciders, the category is diversifying into areas such as the ‘spider’ (spirit-flavoured cider).

“Young adult consumers have a thirst for experimentation with their drinks so in order to appeal to this desire for constant innovations and pioneering developments cider producers invest heavily in [new products],” said Ed Shoebridge, head of customer marketing at C&C Group.

“Through continued investment in NPD we believe that cider drinkers, both old and new, will continue to enjoy cider in the on-trade.”

Innovation in cider isn’t limited to the drinks firms, either.

Food matching has been highlighted as a strategy operators can use to help grow sales of cider in their outlets.

Debs Carter, marketing director for alcohol at SHS – the firm behind the Merrydown and Orwell’s cider brands – said the company sees “cider and food pairing as a major growth opportunity for food-led pub and bar operators”.

“There’s a great deal of consumer interest around food-matching drinks – not only wine, but also beer, adult soft drinks and cider,” said Carter.