IT may be described as a Wishaw institution, but things don’t stand still at the Commercial Hotel, Bar & Club – winner of the 2014 SLTN Beer Quality Award, sponsored by Tennent’s.
Having made the category shortlist the previous year, the team at the Commercial, which is part of Manorview Hotels & Leisure Group, pulled out all the stops to impress the judges, improving upon the venue’s already high standards to win the SLTN Award for 2014.
Stephen Dickson, quality co-ordinator at Tennent Caledonian and one of the judges of SLTN’s Beer Quality Award, said: “I have visited and judged the Commercial on several occasions over the past few years and in my line of work it is heartening to see a publican continually take on advice to improve quality within their outlet.”
Dickson said the commitment and drive to improve quality shown by general manager Adele Montgomery and the Commercial’s staff were key components in the venue’s success.
It’s no surprise that the Commercial has evolved during Montgomery’s time behind the bar.
The GM has over three decades’ experience at the venue; but it was work in early 2014 which pushed the Wishaw bar to victory in the SLTN Awards.
The installation of a new 20-metre stainless steel bar included three-tier shelving, which has allowed staff to implement a new glass rotation system.
Glasses removed from one of the Commercial’s two glass washers, which were also installed as part of the bar’s refresh, are placed on the bottom shelf. These glasses are then shifted to the top and middle shelves systematically, to ensure the hard work in the cellar isn’t ruined by a warm, wet glass. 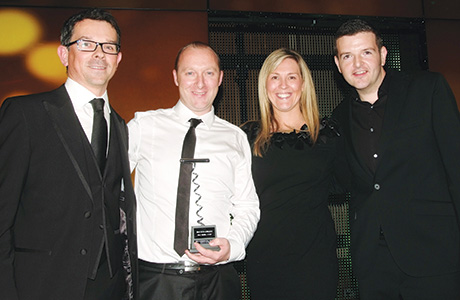 There have also been changes in the Commercial’s cellar, where a new freezer curtain was installed to improve temperature consistency following comments from Dickson in 2013.
And it’s not just the right kit that keeps cellar standards high at the Commercial.
Having the right procedures in place is key, according to Montgomery, who insists on record-keeping for tasks performed in the cellar – a practice which impressed SLTN Awards judges.
“I believe if you’re doing something it should be recorded,” said Montgomery.
With 18 lines running from the Commercial’s cellar to the bar, line cleaning could be a big job.
Montgomery doesn’t see it that way, however, thanks to the venue’s strict adherence to its cellar routine.
“We maintain the pipes; if you’ve got to ‘clean’ the pipes it means your pipes aren’t getting done on a regular basis,” she said.
It’s not just maintenance and cleaning which are subject to strict record keeping in the Commercial’s cellar, there is also a rigorous approach to stock control.
The venue operates a keg rotation programme which involves checking the ‘use by’ dates on all kegs prior to any new deliveries arriving on site.
This allows staff at the Commercial to ensure the correct kegs are sold in the correct order. If a keg is found to have a use by date close to lapse it is transferred to a sister venue in the Manorview estate to ensure waste is avoided.
Kegs and lines aren’t the only areas given regular attention at the Commercial. Montgomery said staff training is a top priority.
New staff are giving an induction covering the processes and procedures in place at the Commercial, while regular training from Tennent Caledonian helps to ensure all members of staff excel when it comes to dispense.
With all the hard work that goes into providing a consistent quality pint for the Commercial’s customers, taking home the SLTN Beer Quality Award was welcome recognition for Manorview, Montgomery and the team.
“I was over the moon, I’ve worked here for 35 years and it was really nice that they [SLTN Awards judges] can see the hard work themselves,” she said.
“The staff are as hard working as anybody and you can’t have a good bar without good staff.”