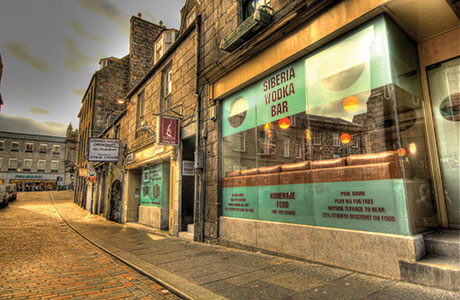 WHILE other spirits derive flavour from cask maturing or botanical infusion, vodka producers have long promoted their liquid’s purity and ability to be mixed with a broad spectrum of flavours.
And, it seems, with some success as vodka continues to top the spirits category (see page 16).
But are consumers becoming more experimental and drinking the spirit with a broader range of mixers than the traditional vodka and cola serve?
Bartenders contacted by SLTN said the spirit’s subtle flavours and ‘malleable’ nature could be an important factor in vodka’s broad appeal.
Despite this, Gordon Purnell, general manager at Edinburgh cocktail bar Panda & Sons, said vodka can present a challenge for bartenders when it comes to drinks creation.
“It’s a good kind of challenge to make a strong vodka drink that consumers and bartenders will enjoy,” said Purnell.
“It’s easy to mix but hard to find a balance.”
Finding the right balance for a vodka cocktail hasn’t been too much of a problem at Panda & Sons.
The venue’s cocktail menu offers a variety of vodka serves including owner Iain McPherson’s Diageo World Class Scottish winning cocktail for 2013, Liquid Brunch. A mix that combines Ketel One vodka with ingredients such as chamomile tea and ginger wine, Liquid Brunch is served as a sharer for three complete with lemon essence oshibori (hand towels).
As a speakeasy themed bar, Panda & Sons steers closer to classic cocktails than contemporary shorts, and vodka drinkers have been moving towards one serve in particular at the venue.
“More and more, the biggest change has been more people being interested in Martinis,” said Purnell.
The Martini drinkers don’t just know their cocktails, they also know their spirits and will request them by name, according to Purnell.
“If people know their vodka and know their Martinis they’ll definitely ask for a brand,” he said.
Stuart McPhee, general manager at Siberia Vodka Bar in Aberdeen, agreed that a segment of customers have become more brand aware when ordering vodka in recent years and are exploring the different small batch products on offer.
“I’ve been here since the end of 2013 and over the last year we’ve definitely seen a switch towards more nice products,” said McPhee.
With a wide range of vodkas now available, knowledge and appreciation of vodka is something which staff at Siberia try to pass on to customers, said McPhee, although not necessarily during a busy club night.
“The main thing about us is we try and push niche vodka to the customer and engage with the customer when we have time to,” he said.

However the venue, which is open for business from lunchtime until late at night, doesn’t leave anyone out in the cold by focusing solely on small batch vodkas.
McPhee acknowledged that vodka mix serves are “definitely” still the biggest seller for the category, proving particularly popular with late night crowds.
And it’s vodka’s capacity to appeal to a broad range of customers which McPhee believes is key to the spirit’s continuing success in the Scottish trade.
“Mass market is driving vodka,” he added. “You’ll get your gins that are really nice but just on mass, vodka drinkers will drink vodka.”