AN American pizza chain will launch its first European unit this month when Project Pie opens its doors in Dundee.
The ‘fast casual’ restaurant brand, which was founded in California by entrepreneur James Markham, already has a presence across the US and the Philippines.
The UK and Ireland franchise was purchased last year by property developers John and Susan Canavan with Niall Howard, former chief executive of international restaurant group Hakkasan.
Howard, who is based in Edinburgh, was recruited to the project last year after the Canavans decided to bring the concept – which combines fast, freshly-prepared pizza with stylish surroundings – to the UK.
“I went out to California to see them [the Canavans] just over a year ago and went to the first Project Pie store in San Diego to meet them and James Markham,” Howard told SLTN. 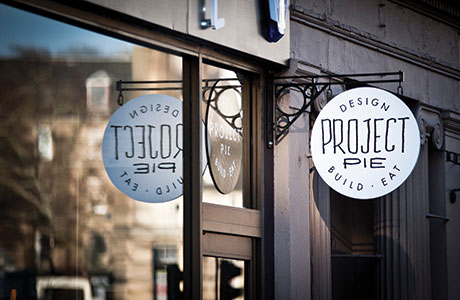 “The bottom line is I loved what I saw there and thought it would very easily translate into the UK without any problem.
“At first I was going to consult and help them bring it to the UK, but liked it so much I became an equal partner with John and Susan.”
The trio considered both Glasgow and Edinburgh but were unable to find any suitable sites.
The Dundee location, said Howard, was perfect both in terms of the unit itself and its location on Reform Street.
A significant share of Project Pie’s customer base is expected to be students – an abundant group in Dundee – as well as office workers and young families.
“When we thought about it, Dundee has the most centralised population of students in Scotland – and an amazing amount of student accommodation,” said Howard.
“I knew about Dundee, about the waterfront development.
“So when we put that all together it started to make sense to perhaps do the first one here.
“So far it’s turned out to be a good decision.”
Working with local architectural and design firm Nicoll Russell Studios and shopfitter Bentleys, the former Santander branch was transformed into a 60-cover eatery featuring exposed brickwork and steel.
A combination of smaller, circular tables and longer bench seating was selected to make the most of the limited floorspace, while the walls sport an assortment of slogans and imagery from local illustrators.
A Wood Stone oven dominates the serving area, where customers are able to design their own pizza to order.
“We found great people in Dundee,” said Howard.
“Nicoll Russell helped us a lot. Bentleys were fantastic, as were all the sub-contractors.”
On the drinks front, the business is in the process of applying for a premises licence, with plans to stock a small range of wine and craft beers if it is granted.
And while Dundee is the first UK location for the brand, Howard said it won’t be the last.
“Our intention is potentially to build 60 stores over the UK and Ireland, which could be a mixture of operated stores and sub-franchised stores,” he said.
“It’s no secret we’re open to looking at funding ideas for the expansion of that plan, based on the success of this store.”