JANUARY may traditionally be a quieter month for the on-trade but Scotland’s whisky makers were firing on all cylinders as new releases flooded in from the islands.
The firm behind the Isle of Skye blended Scotch whisky has launched two limited edition variants of the island blend to coincide with the Year of Food and Drink initiative for 2015.
These comprise a limited edition 18 year old expression, said to offer a “light smoke and fresh fruitiness” on the palate with a “malt and dark chocolate” finish; and a 21 year old expression, which is said to have a “rich full body” with a long finish of dry oak.
Neil Boyd, commercial director of malts for Ian Macleod Distillers, the firm behind the Isle of Skye whiskies, said the limited edition variants “will provide consumers with a superb high quality alternative to the standard eight and 12 year old [whiskies] within the range”.
A taste of the islands can also be found in the latest release from Douglas Laing as the whisky firm takes to the sea with its latest small batch bottling. 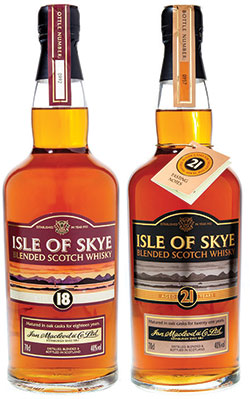 The 46.8% ABV Rock Oyster is said to be made from a blend of malts from the islands of Jura, Islay, Arran and Orkney to create a whisky with an “oceanic character” of sea-salt, sweet peat, smoke, honey and pepper.
Fred Laing, managing director at Douglas Laing, said the whisky “showcases the archetypal island character of gentle peat smoke, vanilla’d honey and salt”.
“If I could select just one dram to transport the whisky enthusiast to the islands of Scotland it would be this one,” said Laing.
“Rock Oyster will sit proudly alongside our other regionally themed vatted malts – Big Peat from Islay, Scallywag from Speyside and Timorous Beastie from the Highlands – hopefully contributing to Douglas Laing’s continued growth.”