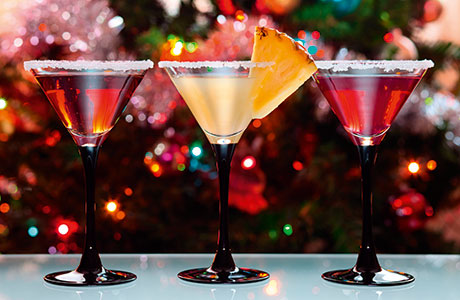 TWO of the country’s biggest drinks firms have urged the on-trade to capitalise on consumers who want to treat themselves this Christmas.
Diageo and Pernod Ricard say those who encourage consumers to ‘trade up’ to premium spirits brands stand to benefit.
Pernod Ricard UK claims 48% of consumers who wouldn’t normally consume spirits during the course of the year, drink them over the festive period.
The firm said one in three drinks served at Christmas is a spirit, with 52 million additional spirits serves sold in the UK on-trade last Christmas.
“Spirits are becoming a much bigger part of the on-trade at Christmas,” said Ian Peart, on-trade channel director at Pernod Ricard UK, whose brands include Chivas Regal Scotch whisky, Jameson Irish whiskey, Absolut vodka and Perrier-Jouët Champagne.
“And this supports this big night out mentality that seems to be going on in the trade, where consumers are going out a bit less but when they go out they’re willing to trade up.”
CGA figures quoted by the company show premium wine and spirits grew in the on-trade last Christmas.
Champagne also added sparkle to festive social gatherings, with 46% of Champagne volumes sold during the festive period.
Peart urged licensees not to forget about food pairing, sharing platters and hot drink sales.
He also identified areas for growing premium spirits and Champagne sales during Christmas.
They include the ‘with food occasion’, ‘the up-tempo occasion’, ‘the treat mentality’, ‘cocktail masterclasses’ and ‘the Champagne occasion’.
Peart said: “As a nation, three quarters of us made at least one visit to a bar, pub, club or restaurant last Christmas, resulting in a total of 150 million visits to an on-trade establishment, so with consumers showing a huge desire to trade up to premium drinks during this key period, there is a big opportunity for those on-trade retailers who are able to capitalise on this growing trend.”
Fellow spirits giant Diageo, meanwhile, is distributing a special winter serves kit to licensees ahead of the festive season.
It is part of a winter spirits marketing campaign to show how spirit and mixer serves can drive sales throughout the winter period.
The firm, whose brands include Gordon’s gin, Smirnoff vodka, Baileys Irish Cream and Johnnie Walker whisky, hopes to inspire licensees to maximise spirit sales during a period where more than half of customers are looking to treat themselves.
Diageo claims its spirit sales increased by 39% over Christmas 2013 compared to an average month.
The winter serves kits, which include Christmas drinks baubles and Christmas tree sharing serve trays, are designed to encourage licensees to serve exciting spirit and mixers over the festive period.
The campaign also focuses on “upselling premium drinks” and offering Christmas cocktails to maximise sales.
And licensees are encouraged to consider a range of hot serves, such as a warm Gordon’s and apple juice, or a Baileys hot chocolate.
Faith Holland, head of category development, on-trade, at Diageo, said: “Spirits drive over half of the additional drinks sold over the Christmas period, so there’s a massive opportunity for licensees to maximise their spirits sales and capitalise on the festive period.
“In a season bursting with social gatherings and a time where consumers are looking for new and exciting shared experiences, the new serving vessels will provide licensees with a unique and interesting drinks format to complement the more festive spirit.”