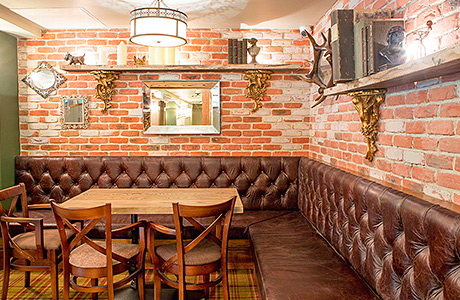 CRISP white render and cedar wood cladding, a contemporary glass frontage and first-floor terrace, smart signage and external lighting – passers-by might be forgiven for thinking The Busby Hotel is a new-build property.

In fact, it’s been a fixture in the East Renfrewshire village for decades.
But the property, which overlooks the River Cart, has just undergone a massive £2.5 million refurbishment by parent company Manorview Hotels & Leisure Group, which bought The Busby, along with the nearby Redhurst Hotel, from administrators in February 2013.
As Manorview managing director Steve Graham showed SLTN around the refurbished Busby Hotel the week before its October 23 launch, he admitted it might have been easier to build a new hotel from scratch, given the extent of the project.
But Graham has a real passion for developing properties.
Since he set up Manorview in 2007, the group has overhauled each of the properties in its portfolio, including The Torrance in East Kilbride, The Lynnhurst in Johnstone and The Commercial in Wishaw.
The Busby, however, represented a change in approach for the company.
It’s the first time Manorview has carried out a development in one phase; it’s also the first time the group has employed a main contractor to work alongside its 17-strong in-house development team, which has handled all projects up to now.
The new strategy wasn’t a conscious decision from the outset. 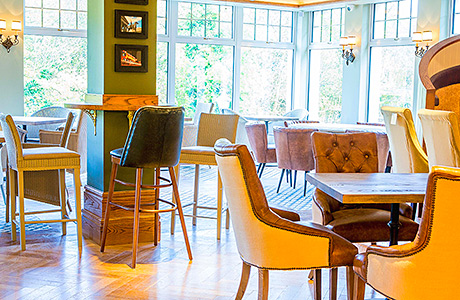 Manorview intended to apply its tried and tested phased approach to the project, carrying out the work in three stages over 18 months, beginning with the bar and restaurant.
But a number of factors meant plans changed.
“We had planned to refurbish both properties [The Busby and The Redhurst] in phases the way we’ve done with all our other properties,” Graham told SLTN.
“We spruced up The Redhurst; it’s in a prominent location on a main road and it’s trading well.
“But The Busby is off the main road and there’s no real passing trade so we decided to bring it forward.
“We had also taken on Boclair House in Bearsden (which Manorview intends to develop as a boutique hotel) and wanted to get on to that so we decided to do all of The Busby at once.”
Plans for the full project had already been drawn up and approved by East Renfrewshire Council; and design firm Space ID, which has worked on other Manorview properties, had designed the interior space.
Graham met with Barclays, which Manorview banks with, to outline the intention to move from a phased refurb of The Busby to the full development at once; and Barclays was, he said, “very supportive”.
Manorview, which Graham runs with his niece Fallon Cowley, who is the operations director, her husband Anthony (the group’s development director), and Graham’s son Carlton, appointed Hugh Stirling as the main contractor, and, on January 6, work on the project got underway.
Drawing on their experience of developing and running other hotels, the day-to-day operation of the business very much drove the remodelling of the property.
The ‘spine’ of the three-storey building was removed to open up what had previously been a long and narrow bar area, allowing the space to flow into the new glass-fronted extension.
The two first-floor function areas were enlarged, to accommodate 180 and 80 guests respectively, with a new terrace, which is accessible from both, created on the roof of the extension. And three bedrooms were removed from the property’s initial tally of 32 to allow for the creation of the honeymoon suite, which has its own private terrace with hot-tub.
However, it’s not just in the front of house areas where the operation of the business influenced the design.
A new cellar was created to accommodate the extensive range of draught lagers and craft beers now on offer at The Busby; a special storage unit was built outside the function rooms to house tables and chairs when they’re not in use; and a delivery bay and bin store was created, which offers direct access to the main kitchen and is concealed from view by a timber fence and landscaping. 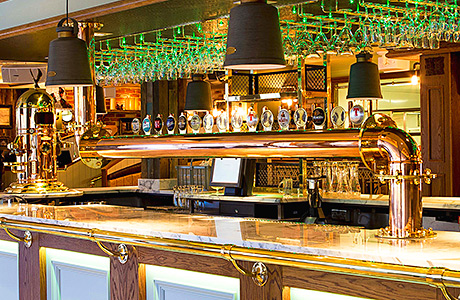 When it came to the interior design, the team at Manorview had one overriding prerequisite: that it was unlike anything else in the portfolio.
“The main brief to Space ID was to make it different to our other venues and ‘safe’ – that’s a word I like when it comes to design; I didn’t want it too off the wall,” said Graham.
“And we wanted large windows at the front of the building – that’s a bit of a trademark of ours but it links the hotel to the outside world – and cedar cladding on the outside of the building, which we’ve got at most of our others.
“We’ve worked with Space ID on our other properties; they know us and they know what we like.”
The look of the hotel certainly commands attention from the outset – whether it’s the glass-fronted extension, decked terrace area complete with outdoor TV screen, first-floor terrace with its chunky wicker furniture, or the landscaped gardens, complete with bridge and bandstand, which were developed with the wedding market in mind.
Inside, the 140-cover bar restaurant, which is called Carters and will major in Italian cuisine with a Scottish twist, is dominated by a central bar topped with white Italian marble.
The bar, in turn, is dominated by a three and a half-metre long brass and copper beer font, by Concept Metals; it features 16 taps dispensing a range of draught beers including Tennent’s, Caledonia Best and Samuel Smith Pure as well as Drygate’s Bearface Lager, Gladeye IPA and Outta Space Apple Ale. The bar also features a brass and copper coffee machine.
Beyond the bar counter, other main features include parquet flooring, a wall of ‘quirky’ objects, a ‘distressed’-look ceiling, and an open pass, which offers a glimpse into the brand new stainless steel kitchen.
The bar and restaurant area is ‘split’ into sections through the use of different styles of furniture – from dark wood dining tables and brown leather chairs, to curved booths with quirky coloured light-shade fittings above them, to brown leather banquette seating on the raised area at the very back of the space. There’s also a DJ booth and stage area for live entertainment at weekends.
Upstairs, the first-floor function rooms have been designed with versatility in mind and aim to cater for everything from weddings to business conferences. Both the 80 and 180-capacity rooms feature their own bars, wood panelling and muted colour schemes; colour can be introduced via the lighting system, which is set into the ceiling coving.
The remainder of the upper floors are taken up with the now 29 bedrooms and suites, which comprise 11 executive and 15 standard rooms, including a couple with wider doors offering disabled access; two suites and the honeymoon suite.
All 29 rooms have been designed and finished to a high standard, with furniture by Target and bathroom suites and tiles by Porcelanosa. In the honeymoon suite, a large free-standing bath is set against a silver mosaic-tiled wall, while its private terrace and hot-tub is a “unique selling point”, according to Graham.
“We really pushed the boat out with the refurbishment,” he said. “And we’re really pleased with the outcome.
“It was certainly challenging at times but any problems we had were normal for a building site.
“We’ve got a really good team of staff, head office staff and management, and everyone has been key to getting this off the ground.
“East Renfrewshire Council’s planning, building control and licensing departments have been first class; and Barclays has been very supportive of us.
“It has been a steep learning curve because it’s the first development where we’ve not done the whole thing ourselves and it was the first time we’ve done a full project at once.
“With The Busby no stone has been left unturned. It would probably have been easier to build a new hotel; we’ve basically built a new hotel within the old one.
“It’s been so thorough and I think there is a real sense of completion.”

‘We are very proud to be associated with the development and have been delighted to be able to showcase our manufactured joinery work on such a spectacular project of this scale. I think it would be fair to say that the project has been extremely challenging at times for us all. However, seeing the finished article now, it is a compliment to the attention to design, detail and the exacting standards of the Manorview team.’
– Angus Alston, Hugh Stirling Ltd

‘Providing great food and drink was a priority so we designed an open kitchen pass alongside booth seating and other furniture which is very comfortable for drinks and also perfect for dining. Manorview specialises in providing that amazing wedding experience so the first floor function rooms and guest rooms had to tick every box; and the honeymoon suite is extra special. All in all it’s been a pleasure to have worked on and is totally different from all of the other Manorview venues we have worked on.’
– Michael Simmons, Space ID