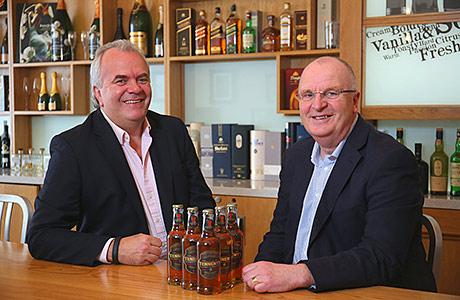 JOHN Gilligan has stepped down from his role as managing director of Tennent Caledonian Breweries.

Gilligan, who joined TCB in 2011, officially stepped down following a six-month handover to recently-appointed chief executive, Brian Calder.
Gilligan (left) and Calder (far left) have been working to integrate the Wallace’s Express and Tennent Caledonian businesses following Tennent’s owner C&C Group’s acquisition of Wallaces in March. Gilligan will continue to work part-time with TCB on customer service and corporate social responsibility.
He described his time at Tennent’s as “one of the most satisfying periods” of his career.
“I have known Brian Calder throughout my career and now, as I leave the business and Brian takes full control, I am confident that he will lead Tennent Caledonian Breweries to even greater success,” said Gilligan.