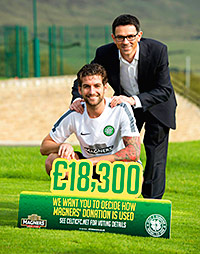 THE firm behind Irish cider brand Magners has donated £18,300 to the Celtic FC Foundation through its Goals for Charity initiative.

C&C Group, owner of Celtic sponsor Magners, pledged to donate £150 for every competitive goal the club scored during the 2013/14 season; £18,300 was generated after 122 goals were netted.
Paul Condron of Magners confirmed the charity initiative will continue through the 2014/15 football season.