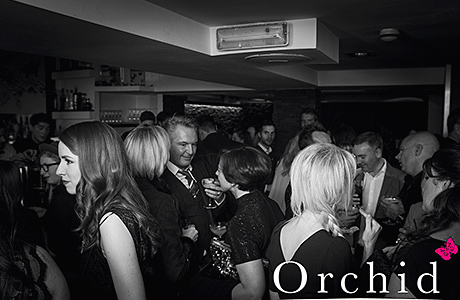 On October 17, Orchid will close to the public for three hours for a ‘roaring twenties’ themed birthday event to thank those that have helped the bar over the years.
Orchid general manager Martin Farmer told SLTN the guest list comprises around 130 people from across the trade, including a number of reps, brand ambassadors, local bar staff and operators and investors, including Orchid owner Benjamin Iravani, that have been “influential in keeping us [Orchid] going” over the last five years.
This year’s party will consist of cocktails, and canapés with entertainment provided by a live jazz funk band.
“We run the night as a black tie event, it’s always nice to get everyone dressed up,” said Farmer.
It’s not just a celebration, however, as Orchid’s birthday parties, which have become a fixture on the venue’s annual calendar of events, also aim to give something back to the community.
“On the night we sponsor a charity,” said Farmer.
“This year it’s Alzheimer’s Scotland. It’s quite close to quite a lot of people in our bar.
“For an hour we run what we call a sponsored bar and the money guests would spend on drinks is donated to the charity and the [Orchid] investors cover the tab.”

Farmer expects this year’s charity fundraiser will be a success. Last year, guests at the birthday bash raised £1500 for children’s charity Charlie House.
This year’s anniversary celebration is an extra special milestone for Farmer and the team at Orchid as the last twelve months have seen a long-term change in the bar’s offer.
“The first couple of years the bar was a bit of a party bar,” said Farmer. “In the last few years we’ve gone more cocktail-led.
“We’ve limited the number of people coming in on a Friday and Saturday night.
“The best moment for us was winning the SLTN Cocktail Bar of the Year award (in 2012).
“[It felt like] being noticed for the things we were doing and are trying to do.”
A number of Orchid staff have also celebrated success in cocktail competitions.
Bartender Alex Lawrence has been on sabbatical from Orchid, working in Columbia after winning the La Hechicera Rum Wanderlust competition this year, while last month another of the bar team, Will Farquhar, secured a place in the No.3 Gin cocktail competition after winning the Brockmans Gin competition in Aberdeen along with Orchid staff member Katherine Charleston.
This month’s event may be a celebration of Orchid’s success, but that won’t breed complacency at the Aberdeen bar, according to Farmer, who said there are plans for a refurbishment in March.
“We want to give people coming back all the time something new to look at,” he said.