A HUSBAND and wife team who have run a Dumfries nightclub for the past five years are preparing to embark on a new venture as they open their own ‘cocktail gastropub’.

Anna and Donald Cruickshank, who moved into the trade from a retail background, will leave Chancers, which they lease from a private landlord, in November.
Before that, however, they are set to launch their new venue N’Dulge in the former Souter Johnnie’s Tavern, which had lain empty for five years before the couple bought it in 2011.
The Cruickshanks have spent the past three years and a claimed £500,000 refurbishing the premises to bring their ‘cocktail gastropub’ concept to life.
As Anna told SLTN last week, the new venue was a natural next step for them.
“All my life I’ve been a manager in retail, so when the opportunity arose [to run the nightclub] we jumped at it,” she said.
“The nightclub’s been great for us; we’ve learned a lot.
“But the bar is going to be a different thing altogether because it’s our own baby and it’s a completely different market.”

All my life I’ve been a manager in retail, so when the opportunity arose we jumped at it.

Food will form a major part of the offer at N’Dulge.
The couple have recruited chef Craig Watson and, as SLTN went to press, were in the process of finalising the menu ahead of the October 11 launch night.
A range of “quirky” dishes is promised, however, in a move Anna hopes will bring “something different” to the town; the venue will open from 9am for breakfasts and coffees and will be licensed from 11am until 2.15am. 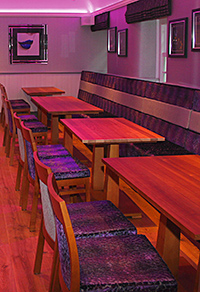 On drinks, the Cruickshanks have kept the same suppliers which they used during their time at Chancers, including Matthew Clark, Inverarity Morton and The Keg Shed.
The draught offer will include beers from Glasgow-based West brewery, whose St Mungo, Munich Red and West 4 will join Tennent’s Lager on the fonts; a selection of bottled craft beers will also be stocked.
Spirits will include a host of premium brands, including Grey Goose, Absolut Elyx, Crystal Head, Skyy, Belvedere and Zubrowka vodkas and gins such as Hendrick’s, Bloom and Bombay Sapphire.
The couple intend to manage the new venue themselves, backed by a team of 19 staff, which includes four in the kitchen, nine bar staff and six waiting staff.
And Anna is confident the new venue will have broad appeal.
“We are not aiming for a specific market, we want to attract a mix of people at different times of the day,” she said.
“We’ve been working on the bar for three years now and are just dying to get going.”