ON paper, the two outlets could not be more different. One is a private members’ club in the heart of Glasgow city centre; the other, a traditional pub on the fringes of the city’s west end.

But when Michael Robertson decided to branch out on his own, that was exactly his plan.
After running 29, Lynnet Leisure’s private members’ club in Royal Exchange Square, for six years, Robertson wanted a fresh challenge – and a very different style of outlet for his first solo venture.
And when the lease for the Punch Taverns-owned McPhabbs, on Glasgow’s Sandyford Place near Charing Cross, became available last October, it ticked all the boxes.
“I knew I didn’t want something in the city centre,” Robertson told SLTN.
“I wanted something a bit more provincial; a neighbourhood bar. And I was attracted to the Finnieston area in general.
“I found out about McPhabbs when I was on holiday late last year and I knew the outlet.
“McPhabbs has always been a warm pub and I saw potential; I knew I had something to build on. So I did my business plan while I was on holiday and sent it to Punch; and they loved the concept.”
Robertson’s plan was to establish McPhabbs as a neighbourhood bar, with first class customer service underpinning the entire concept.
Good service is something Robertson has been a stickler for ever since he got his first taste of the hospitality industry at 35,000 feet when he worked as cabin crew.
His stint in the skies came after working in a benefits office for 15 years and propelled Robertson into a career in the trade, which has seen him run Glasgow venues such as Tiger Tiger and The Living Room, as well as 29.
“I worked as cabin crew for two years and it opened my eyes to hospitality as a career,” he said.
“I loved that role of looking after people.
“Everything is about the guest; they want a warm welcome, consistency and quality.
“I wanted to bring all that to McPhabbs. McPhabbs couldn’t be further from 29 in terms of style but I wanted to make sure the high standards were the same.
“My business plan was more about the area and the people who live and work here; it was based on the community re-engaging with McPhabbs. I wanted to take the quality and standards of places like The Living Room and 29 into a pub environment.” 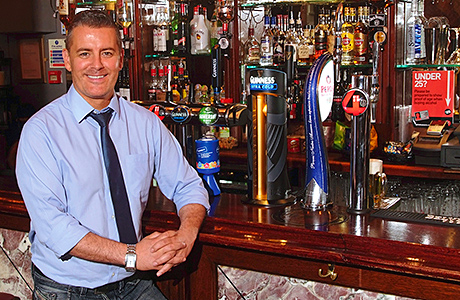 Punch was clearly impressed by Robertson’s plans for the pub and he picked up the keys last November.
But, with three months’ notice to work at 29, which took in the busy festive period, it was February of this year before Robertson could even begin to put his own stamp on the place.
“I was excited about McPhabbs but I had to keep my focus on 29,” he recalled.
“I’m one of these people that has to give 110% to something until it’s finished. I knew after that I could put all my attention, passion and skills into McPhabbs.
“We put a ‘holding menu’ in place and I left the manager here to run things until I got here in February.”
Then Robertson wasted no time in making his mark on the pub.
Inside, the traditional dark wood wall panelling, bar and gantry have been paired with a muted grey colour scheme; TV screens were removed from the booths, and oversized feature light fittings installed instead.
Downstairs, the toilets were completely overhauled, while the 50-capacity function room was spruced up in a bid to utilise the space for a variety of events, from weddings to corporate meetings. It’s now a “key part of the business”, according to Robertson.
It’s not just the pub’s interior that received a makeover.
The beer garden at the front of the venue has been spruced up with new furniture, lighting and Rekorderlig-branded umbrellas; while the decked terrace area at the back of the pub also features new furniture, umbrellas and topiary.
And there are more changes to come, according to Robertson, who funded the initial revamp himself and plans to “create revenue and reinvest” going forward.
The food and drink offer at McPhabbs has also been overhauled, with Robertson working with suppliers to make the changes.
Under his leasehold agreement, he is tied to buy beer, cider and soft drinks from Punch.
The draught beer range includes Tennent’s, West 4, San Miguel, Red Stripe, Staropramen, Peroni Nastro Azzurro, Belhaven Best, Guinness and Somersby cider; there’s a choice of cask ales, which changes on a weekly basis; and the bottled range includes Tiger, Samuel Adams, Estrella Damm, Blue Moon, Budweiser Budvar, Innis & Gunn, Brewdog’s Punk IPA and Rekorderlig ciders.

It was a steep learning curve and it is real pressure but I’m loving it.

Robertson worked with Hallgarten Druitt to compile the wine list, which comprises six whites, six reds and two rosés by the glass (125ml and 175ml) and bottle, as well as Prosecco and Champagne; and with Inverarity Morton to source a range of premium spirits.
Meanwhile, the menu combines dishes like ‘mac and cheese’, haddock fillet and burgers with a range of daily specials; there’s also a Sunday roast.
The revamped food offer has “taken off”, according to Robertson, with the pub currently catering for more than 500 covers a week; and he reckons there’s scope to grow that even further.
He also plans to expand his business in the near future, saying “without doubt I want to have more outlets”.
“I’ve looked at a couple of places already; timing and location is key,” he added.
“This is doing better than I forecast and I have no regrets about making the move.
“It was a steep learning curve and it is real pressure but I’m loving it.”