Alan Hill marks 25 years at Gleneagles ahead of Ryder Cup

For the team at the five-star resort, final preparations are being made ahead of next weekend’s Ryder Cup.
With a global TV audience estimated at 500 million, 45,000 spectators expected each day and all 232 bedrooms and suites in the hotel booked out for players and officials, it is one of the biggest events Gleneagles has staged in its 90-year history.
It’s a major operation, which will see the hotel effectively ‘shut down’ this Sunday (September 21) and the business made ready ahead of the arrival of players and officials on Monday before the competition gets underway on Friday (September 26); after the tournament concludes next Sunday (September 28), players and officials are due to depart the following day, and Hill said it will be “business as usual” at Gleneagles from the Tuesday (September 30), with the hotel fully-booked for the remainder of the week.
It seems a quick turnaround for such a large-scale event; but Hill said it’s all in a day’s work for the team of 750 permanent staff.
“There’s a lot of preparation going on down on the golf course just now but it’s relatively easy from our side of the business,” Hill told SLTN.
“The players and officials are ultimately coming here to work but they want to enjoy a taste of Scotland so we’re using lots of local produce, like beef and lamb, and seasonal ingredients like berries.
“We’ve had the menus done for about two months now, although we will tweak them slightly now we know which players we’ve got.
“It’s a bit like the G8 (summit, which was held at Gleneagles in 2005); it’s all set in stone at this stage but there is always something that will crop up that we deal with at the time.
“At the same time, we’re trying to concentrate on today’s business; if we all focus on the Ryder Cup we could end up dropping the ball on our other business.”
Hill’s wealth of experience will be drawn upon to ensure both front and back of house run smoothly throughout the Ryder Cup. 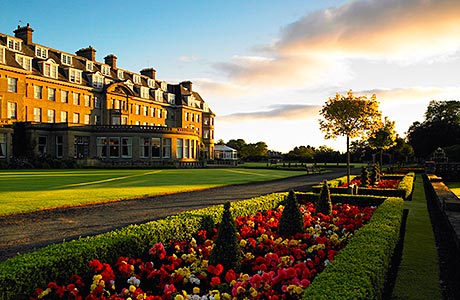 It was while training as a chef at college that he got his first taste of five-star service.
Hill, who hails from Scunthorpe, came second in a cooking competition at college and, although there was no second prize, his then head of faculty, TV chef Kevin Woodford, arranged for him to work at The Dorchester in London for six weeks.
“I had already been to The Dorchester – I had walked past it and said to myself ‘one day I’ll work there’,” said Hill.

Moving from the kitchen to front of house was a huge change.

“I started in the veg section; shelling beans or picking
spinach for hours – that was it. But you got to work in all the different sections of The Dorchester’s kitchens so you got a very thorough understanding of it.”
The placement ultimately led to a job at The Dorchester for Hill in 1976. During his three years there he was offered promotion but, keen to gain as broad a range of experience as possible, Hill went to Switzerland, where he spent a winter season working in St Moritz.
Returning to London, he was drawn back to The Dorchester before moving to take his first executive chef role at The Caledonian hotel in Edinburgh in the 1980s. The Caley was, at that time, the sister hotel to Gleneagles and Hill was asked to join the team at the Perthshire resort but felt it was too early in his career to make the move at that stage.
Instead, after four years at The Caley, he moved to Spain’s La Manga Club before returning to London and The Savoy Grill, where he cooked for a host of famous faces. His final service at The Savoy saw him cook for the Queen Mother’s 89th birthday dinner; he then headed north to take up the post of executive chef at Gleneagles in 1989.
After that came perhaps the biggest change in his career, moving from the kitchen to front of house as food and beverage manager at Gleneagles.
“It was a huge change,” said Hill.
“I went from the kitchen and my white jacket and hat to putting on a suit. It was a totally different ball game but one where I thought I could work to join two teams [front and back of house] together. Sometimes the two pull against each other but it’s crucial the two work together.”
From his F&B role, Hill then had a spell as hotel manager, before taking up his current post as hotel director.
It’s not just Hill’s role at Gleneagles that has changed over the past 25 years.
The resort has also developed.
“The main business used to be golf and the summer season,” said Hill.
“Now all the facilities blend together and it’s a year-round business. We have a staff of 750 and we run that all year round; it helps us retain people and maintain standards.”
It’s an approach that is also credited with helping grow the business – growth that Hill is confident the Ryder Cup will only boost further.
So will he mark his 25-year milestone once the spectators and golfers have left Gleneagles at the end of this month?
“I’m not sure; it doesn’t even seem like I’ve been here for 25 years,” he added.
“I think a lot of people come here thinking they’ll stay for five years and end up staying for 25.
“My heart and passion has probably only been in four properties: The Dorchester, The Caley, The Savoy and Gleneagles. I love coming to work because I love what I do.
“I’m looking forward to the next 25 years.”