Perseverance pays off for Steven McLeod, as Gillian McKenzie reports 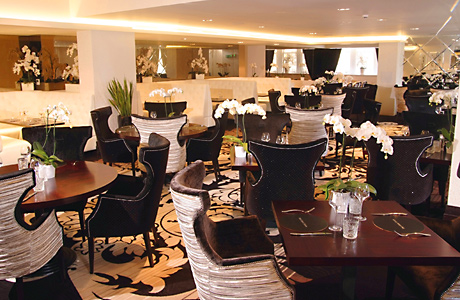 PLUSH cream leather booths studded with sparkling Swarovski crystals, luxurious black carpets, opulent mirrors, bowls of white orchids – stepping in to Hotel Colessio in Stirling there’s not even the slightest hint that the refurbishment project was beset by problems and delays.

It’s testament to owner Steven McLeod’s quest for perfection and acute attention to detail.
It’s also the result of his resolute determination to see the project in his home city, which over-ran by two years and doubled in cost, through to the end.
McLeod, whose Aurora Hotel Collection includes Airth Castle, Cairn Lodge, Glenbervie House and the Kenmore Hotel, bought the Georgian building on Spittal Street, which was once home to a bank and then Stirling Royal Infirmary before laterally being used as NHS headquarters, back in 2009.
His plan was, he thought, pretty straightforward.
McLeod, who has invested millions of pounds revamping his portfolio of listed properties, would retain the impressive columned façade and add an extension to the rear of the property to accommodate 40 bedrooms and a ballroom.
Speaking to SLTN in the newly completed Colessio late last month, McLeod said he had a clear vision for the Stirling property from the minute he stepped through the door.
“I always know what I want to do with a place straight away,” he said.
“It was the same with Glenbervie – the minute I went down the drive I knew.
“To be honest, this [Colessio] came about by accident. I was trying to buy another building for a bar when I found out that this was coming on to the market. I came to look at it and that was it.
“My vision was to open up the ground floor; I wanted to be able to see from one side to the other.
“It took about a year to get planning. It was all pretty straightforward and it should have been easy. Actually, it was the hardest project I’ve ever done.”
The build got underway in mid-2010.
However, around a year later, the building company that had been working on the project ceased trading and the site effectively ground to a halt.
“I was left with a half-finished development and there was nothing I could do; everything just froze,” McLeod recalled.
“I had all my handmade furniture and carpets – I was ready to roll thinking we’d be open in 2012 – so I had to put all that into storage.
“After that happened I couldn’t be here so I just fenced it off, hired 24-hour security to guard the site and parked it to one side. I didn’t want any more negatives, I needed to focus on good things.”

Having temporarily drawn a line under the Stirling development, McLeod went on to acquire Solsgirth House near Dollar (giving the company an alternative venue to accommodate the 74 weddings that had been booked for Colessio), Cairn Lodge in Auchterarder and Kenmore Hotel and Luxury Lodges on the banks of the River Tay (the Perthshire hotel was originally run by Aurora under a management contract but has since joined the portfolio).
The year away from the Stirling project also enabled McLeod to refocus on completing the work – and to restructure his company, selling shares to a business partner to help facilitate the completion of Colessio and further expansion of Aurora.
Looking back, McLeod reckons the ‘time out’ from the Stirling project was vital for him personally – and for Aurora.
“It was a bitter pill for me to swallow when it all ground to a halt,” he said.
“It took me a year. I didn’t even pass by the site during that time, I just shelved it.
“I knew I could either walk away or try and fix it. Walking away would have been the easy thing to do but that’s not me. And I knew if I did walk away, someone else would come along and do it.
“The only way I could fix it was to give up something that was mine so I sold shares in Aurora to a business partner.
“The banks had basically stopped lending at that point and, realistically, no one would want to fund a half-done development so I sold shares in Aurora, which I owned 100% of at the time, and it’s underpinned the future of the company.
“This [Colessio] wouldn’t be here if I hadn’t done that.”
Armed with his original vision for the property, McLeod appointed Robertson Construction and work resumed on site in January 2013.
Eighteen months later, the transformation is complete – and McLeod is clearly delighted that his vision for the building has finally been realised.
In line with his original blueprint, the entire ground floor space has been opened up.
McLeod worked with Guardian Soft Furnishings and Design-A-Bar, both of which he has worked with on previous refurbishment projects, as well as Stirling-based Bathroom Planet, to implement the monochrome colour scheme throughout the hotel’s public areas and each of the 40 individually-designed bedrooms and suites.
The result is a striking black and white interior which takes hold as soon as guests pass through the columned facade and enter the main door.
Located on the left hand side of the newly open-plan ground floor space, the bar area is dominated by a black wood bar counter with white marble top and mirrored back-bar framed in black wood; the bar runs the entire width of the space and features an LED colour-changing system from Ottimo Lighting.
The bar is the main feature in a space which pairs a black carpet, white flock wallpaper and white curtains featuring black feather and crystal tie-backs with low-slung armchairs upholstered in black velvet and round dark wood tables topped with white marble.
The 120-cover Grill Room restaurant, meanwhile, occupies the right hand side of the open-plan ground floor.
Cream quilted leather booths studded with Swarovski crystals run along one wall, with a combination of square and round dark wood tables paired with wing-back style chairs, the backs of which are upholstered in either a luxurious cream horizontal striped fabric or black fabric studded with small crystals. 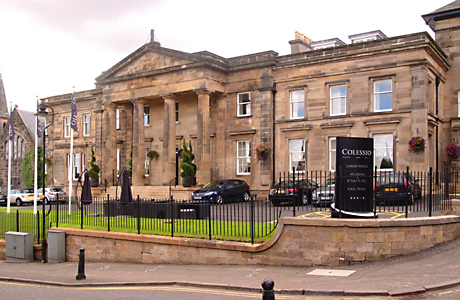 The monochrome palette continues in the 250-capacity ballroom at the rear of the ground floor area.
Dominated by four huge silver chandeliers sourced from Ottimo, the ballroom features one wall of square mirror tiles in a quilted design, with a wall of floor-to-ceiling windows and doors, which lead out to one of three terraces and are dressed with cream curtains and swags and tails, opposite.
The bar is a smaller version of that in the main bar area, only in a lighter wood; panels of the wood also feature on the lower section of the walls.
Upstairs, accessed via the building’s original staircase, the monochrome colour scheme continues in each of the 40 individually-designed bedrooms and suites; features include bespoke artwork, Andrew Martin lamps, Philippe Starck bathrooms, crystal-studded headboards and luxurious black fabrics.
McLeod admits there are more than a few of his own personal touches in the design.
“I design all the interiors myself, I love all that; and I love black and bling,” he said.
“I spent a fortune on the interior but it looks great – luxurious, which is what I wanted.
“On all my projects I work with Guardian Soft Furnishings and Design-A-Bar in Fife, which does all my handmade furniture.
“Corrinne Muir at Guardian is great – she embraces my madness. And I know I can ask Design-A-Bar to make something to fit a specific space and they’ll do it.
“I spent a lot on the bathrooms too, with Porcelanosa and Philippe Starck fittings. It’s all top notch.
“I always spend a lot on bathrooms because you know it’s going to be in for a few years; it’s easy enough to change a chair or something but you want a bathroom to last.”
The food and drink offer is designed to match Colessio’s high-end interior.

The menu in the Grill Room majors in seafood and beef, cooked on a Josper Grill; while drinks include a draught beer range spanning Tennent’s Ice Cold, Heverlee and Caledonia Best supplied by Tennent Caledonian, and a range of premium wines and spirits sourced from Inverarity Morton.
Delighted though McLeod is with the completed Colessio, he is already eyeing his next projects.
He plans to add a 120-bedroom hotel and spa at Glenbervie House Hotel on the outskirts of Larbert; and he is currently considering further acquisitions for Aurora, which he founded in 2005 with the purchase of Airth Castle and which now employs some 400 staff.
“Taking on a business partner has underpinned the future of Aurora and further expansion,” said McLeod.
“I’m looking at a couple of things at the moment.
“Colessio really affected me but not finishing it would have affected me more, especially because it’s my home town – I grew up at the bottom of the hill.
“It’s been some journey but it has made me stronger.
“I’ve got the hunger back now.”