Whisky production to resume on site after more than a century

EDEN Brewery, the St Andrews-based craft brewer, is preparing to launch what it claims is the first whisky distillery in the town in 150 years.

Construction is already underway on the distillery, which is an extension of the existing brewery, and the firm intends to begin production of its first batch of whisky during the week of the Independence Referendum in September.
The Eden Mill distillery will produce Eden Mill single malt, which will be aged using a variety of different types of wood and various cask sizes.
The site of the Eden Brewery has a history of both brewing and distilling.
The Seggie distillery was founded there by famous whisky-producing family the Haigs in 1810, and converted by the family into a brewery in 1860.
The Haig brand is now owned by Diageo.
Eden co-owner Paul Miller has claimed that the new project will create Scotland’s only single-site brewery and distillery.
The new distillery is expected to create 11 jobs within the next two years.
“We are delighted to be announcing what we hope will be a really exciting venture,” said Miller.
“Support and recognition from the trade and consumers for our beer range has been fantastic and we are hugely excited to be creating a wee bit of history with the distillery.
“Customers are not daft and they really do seem to value the authentic production values and integrity and transparency in what we do with our beers.
“We hope those who visit us at ‘The Mill’ will see more of this as we share and demystify spirits making in the 21st century.” 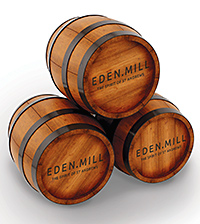