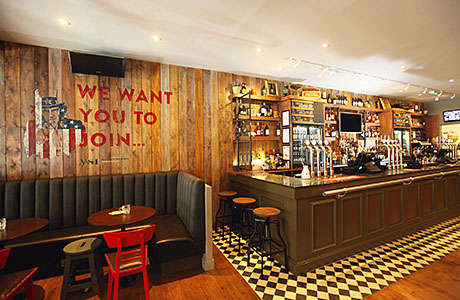 WHEN Maclay Inns bought the former Bay Horse pub in Glasgow, the company’s intention was to create a new outlet that would be considered a family-friendly ‘local’ in the heart of the city centre.

It was a big project.
The ten-week refurb, carried out by Donaldson Construction, involved making significant changes to the Renfield Street unit, including redesigning the main and back-bars, which now feature reclaimed timber cladding, the creation of a new open-plan kitchen, the addition of booth seating, and the creation of a new upstairs events space – called The Nest. Equipped with its own bar and TV, the space has a capacity of 100 people.
“We wanted to make sure the bar felt sociable, relaxing and comfortable, which is why we created large feature booths and seating areas for bigger groups of people to enjoy one another’s company without being split across a large table,” said Maclay Inns marketing manager Lynn Lovelock. 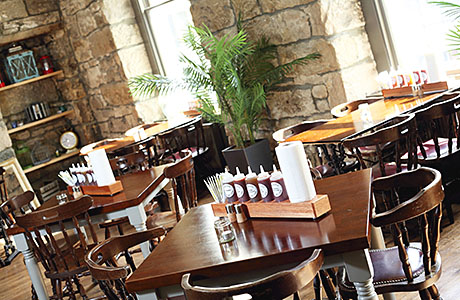 “Being sympathetic to the building’s features was also very important to us during the design period.
“We wanted to keep a lot of its charm, but inject warmth and light into the building. This is why we kept the stone walls, open windows, muted colours and used reclaimed timbers.”
The offer at The Raven revolves around three areas: food, drink and sport. On the food front the outlet combines the likes of hotdogs, burgers and burritos with a focus on slow-smoked meats that include ribs, chicken and pulled pork.
Children (who are allowed in the premises until 9pm under the outlet’s licence) have been catered for with a separate kids menu that includes nachos, sliders, hotdogs and mac and cheese with chips.

The offer at The Raven revolves around three areas: food, drink and sport.

Craft beer is a staple of The Raven’s drinks offer, and there are several craft and cask beers on tap as well as a wide range in the fridge. Featured brewers include Williams Bros, Stewart Brewing, West and Brewdog.
“Our range of cask and craft beers in draught and bottle have something for everyone who is looking for something beyond the mainstream labels,” said Lynn.
Sport is another cornerstone of The Raven’s offer, and Maclay has installed eleven wide-screen TVs throughout the outlet to ensure customers are able to watch sport wherever they are in the unit.
Lynn said The Raven’s design and offer should appeal to any customer “looking for a laid back atmosphere to unwind”.