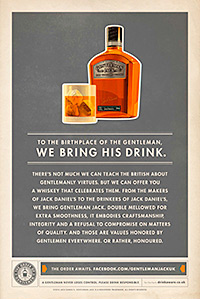 JACK Daniel’s variant Gentleman Jack has made its way to the Glasgow Underground as part of an outdoor advertising campaign.

Posters for the whiskey were unveiled in Glasgow and London underground stations this month as well as outdoor locations in Glasgow, London and Manchester.
The campaign is supported by print advertising and is targeted at consumers aged 26 to 34.
Gentleman Jack’s outdoor campaign follows the launch of the brand’s ‘Order of Gentleman’ activity last year.
The ongoing ‘Order of Gentleman’ campaign features a microsite and Facebook page, both of which focus on an ‘exclusive society’ of Gentleman Jack drinkers while promoting the whiskey’s Tennessee provenance.
Crispin Stephens, marketing manager at Jack Daniel’s, said that following the launch of the Order of Gentleman campaign last year, “we are now looking to branch out and recruit new members who are at that certain stage of their life, whereby they are looking for something refined to reflect their more developed tastes”.
“This is the most significant piece of activity on the platform to date, with the digital, outdoor underground and [print] advertising allowing Gentleman Jack to reach a large number of consumers, driving awareness and ultimately driving sales for licensees and retailers,” said Stephens.
“We’re excited to see the extension of this unique and memorable platform and the gentlemen it will create.”