Team behind Bond No.9 opens bar, restaurant and hotel

THE team behind Leith venue Bond No.9 has branched into the centre of Edinburgh with the launch of Clouds & Soil on Picardy Place.

So-called because it will ultimately trade across five floors, the new venue from Kara Anderson and Chris Flint is currently operating as a bar, restaurant and function space across three of the floors; four letting bedrooms on the upper two levels were nearing completion as SLTN went to press.
Ascending from the basement, Clouds & Soil comprises a 60-cover function room which doubles as a whisky bar, a ground floor bar, which has a capacity of 50, and a 50-cover restaurant on the first floor which overlooks Calton Hill.
Kara and Chris took a hands-on approach to getting their new venture, leased from Iona Pub Partnership, off the ground, carrying out a large portion of the refurbishment work themselves.

We didn’t want to open another Bond but we want to have the same level of service.

The pair built bar tables from old scaffolding, constructed chandeliers from wine racks and even drafted in the upholstery services of Chris’s mother to transform church pews into cushioned booth seating for the ground floor bar.
While the new venue is not a recreation of Bond No.9, there are elements the pair hope to retain.
“We definitely didn’t want to open up another Bond, but we want to have the same level of service,” said Kara.
Where Bond No.9 specialises in premium spirits, picking up the SLTN Spirits Bar of the Year Award in 2012, Kara and Chris hope to establish Clouds & Soil as a wine destination.
To aid them in their task, the pair called in former Bond No.9 general manager Paul O’Donaghue, who has worked for wine supplier Enotria since 2012. And working with a former member of staff had its advantages when it came to hitting the ground running, according to Kara.
“He knows a lot of styles and a lot of trends so he can input that, and he also knows us and he knows our clientele so it made it much easier than it would have been,” she said.
Although Clouds & Soil’s wine list hovers at around 60 bottles, each wine has had to jump a series of hurdles to make the cut.
“A couple of weeks into the refit we had our first sit down and we kind of went through the concept as a list on paper,” Chris explained.
“Then we kind of sat down and had an initial tasting of wines and built a shortlist from that, pinned it down to a final list, then we did a management tasting to make sure we were happy with everything.” 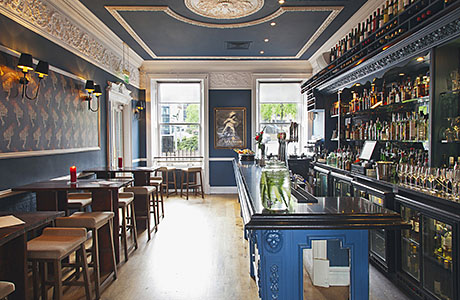 Service is another part of the Bond No.9 operation Kara and Chris are keen to replicate at Clouds & Soil; and the pair have implemented the same level of staff training at the new venue.
“We’ve always been quite big on the training side,” said Chris.
“The argument we’ve always had for it down there [Bond No.9] is we’ve got this huge back-bar and it would seem a shame to have that there with people not knowing what to do with it.
“The same applies up here.
“Although the back-bar is not as big, the wine list is much bigger so the same concept applies.”
Thanks to the extra space provided by Clouds & Soil’s function room, its staff are joined by the team from Bond No.9 in weekly training sessions, which include internal competitions and staff-led training on drinks categories.
And it’s not just the bar staff from Bond No.9 who will be making regular trips between Leith and Picardy Place, as Kara and Chris are committed to dividing their time between the two outlets, as well as their coffee shop in Edinburgh’s Tollcross area.
“Because of the way we work, because we both notice different things and pick up on different aspects of the business, I think if we did have one of us on each we’d end up lacking something in both,” said Chris.
“I think it’s important to keep your original venue going at the same speed as your new venue,” added Kara.
“We’re definitely not going to be up here for the majority of the time, it’ll be completely split.”