The distillery, which has been owned by Japanese company Takara Shuzo since the 1980s, introduced peated single malt Cù Bòcan late last year.
The only single malt in its product range to feature a peated flavour, Cù Bòcan takes its name from the Gaelic for ‘ghost dog’, in honour of a local legend about a spectral hound who stalks the locals of Tomatin village.
Like the peated flavour, the packaging and bottle design are a departure from the rest of the Tomatin range.

We’ve got quite a few options in terms of brand extensions.

“We wanted to target a younger demographic,” Tomatin marketing manager Jennifer Nicol told SLTN.
“The design is definitely not traditional to whisky. The name is Gaelic for ‘ghost dog’, but we didn’t want to call the whisky ‘Ghost Dog’.
“In some ways it retains traditionality, which is quite popular in whisky, but we thought Cù Bòcan is easy for other nationalities to pronounce.
“With the packaging we just wanted something that was going to look a bit trendier, younger, fresher.”
The packaging has found favour this year with an award at the World Whiskies Design Awards, where it scooped the trophy for Best New Launch (Tomatin’s 18 year old single malt picked up the Best Highland Single Malt 13 to 20 Years award at the same event).
Last month, the Cù Bòcan brand was extended with the launch of a limited-edition expression, named Cù Bòcan 1989. 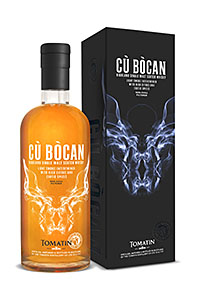 Only 1080 bottles of the cask-strength whisky have been released across the world.
“We’ve got quite a few options in what we can do in terms of further brand extensions,” said Nicol.
Cù Bòcan isn’t the only part of the single malt range that is being developed, however.
The distillery is also in the process of tweaking its core range of Tomatin single malts, replacing the 15 year old expression (matured in American oak) with a 14 year old that has been finished in former port casks.
It adds another flavour profile to the range, which includes sherry (the 12 and 18 year old whiskies) and virgin oak (the Legacy malt).
The Tomatin range is being promoted this year through a range of activity that includes trade golf days and a pop-up cocktail bar at the Belladrum music festival near Inverness.
Nicol said that getting the brand “in front of people” is a key goal for the year ahead.
“As a company we’re very open and flexible, so if people ask us to do tastings or come along and do education and tasting it’s something we’re very keen to do,” she said.