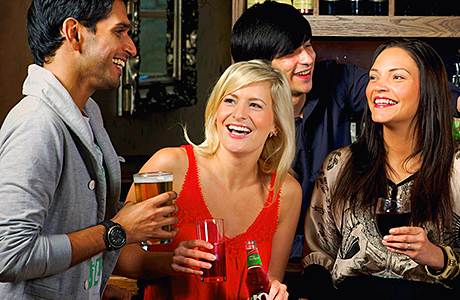 SOFT drinks sales in the on-trade have been static but stable over the past year.

That’s the conclusion of the latest Soft Drinks Report from Britvic, which found UK on-trade sales of soft drinks remained stationary in 2013, at £2.8 billion, with volume sales down 1.8% on the previous year.
Carbonated soft drinks continued to dominate, accounting for 77% of the category and increasing in value by 2% to more than £2.2bn last year.
By format, draught accounted for more than half of soft drinks sales in the UK on-trade, with sales of more than £1.7bn by value.

Draught accounted for more than half of soft drinks sales in the UK on-trade.

In terms of outlet type, managed pub chains remained the leader in soft drinks sales, increasing sales by 2% to £1.4bn. The report credited managed outlets with “successfully tapping into the trend for casual dining and value for money”.
Despite the soft drinks category as a whole remaining static, there were some on-trade winners highlighted in the report.
Of the top three sub-categories, cola retained its top spot. The £1.2bn category grew 1% by value in 2013, despite a 1.3% dip in volume, and accounted for 43% of soft drinks sales by value.
Second placed lemonade showed improvement on a static 2012 with a 4% increase in value and 1.5% increase in volume sales; while fruit juices declined by 8.7% in value and 9.8% in volume terms.
In the smaller sub-categories, recent growth in spirits sales was said to have given a lift to the mixers sector, which experienced 2% value growth with sales breaking the £200m mark.
Energy drinks sales remained flat in value terms during 2013, however volume sales increased by 2%.
Paul Graham, general manager at Britvic Soft Drinks, said that although on-trade soft drinks sales remained flat through 2013, “the leisure channel proved its resilience, with soft drinks fairing better than other segments and holding on to its position as third biggest category in fast moving consumer goods (FMCG) after beer and wine”.
“We are confident that the overall successful performance of soft drinks and the continued evolution of the category is paving the way for a positive and exciting future,” said Graham.