Cromlix was launched following a year-long refurbishment designed to “showcase much of the original heritage” of the Victorian mansion.
Accommodation at the hotel comprises ten bedrooms and five suites, which are said to have been named by Murray after famous Scots such as Burns and Bruce. Each suite features a freestanding bath and a TV screen disguised as a mirror.
Catering comes in the shape of a Chez Roux-branded restaurant, overseen by Michelin Star chef Albert Roux and run by executive head chef Darin Campbell. The conservatory restaurant allows diners to watch the chefs at work in the open kitchen; there’s also a private dining area in the snooker room, where the full-size snooker table can be flipped from green baize to a dining or boardroom table seating 20. 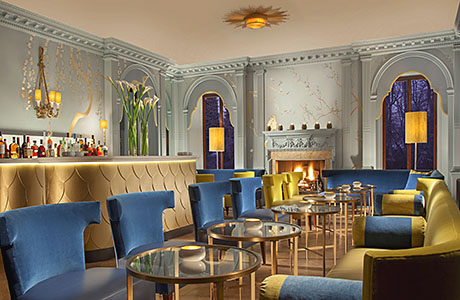 The hotel also has a whisky room, drawing room with open fire, and a bar, which features hand-painted gold leaf designs.
Outside, the grounds include tennis courts, a practise wall in the Wimbledon colours of purple and green, and a chapel which can accommodate wedding parties of up to 30 people.
Norbert Lieder, managing director of Inverlochy Castle Management International (ICMI), which is managing Cromlix, said: “The interiors, service, food and attention to every detail of the customer journey will make sure Cromlix becomes as well known for its service as it is for its famous owner.
“Cromlix and Chez Roux combine to truly offer one of the best hotel and restaurant experiences in the country.
“We look forward to welcoming guests from all over Scotland, the UK and the world.”
Mike Cantlay, chairman of VisitScotland, said: “The revamped Cromlix is bound to be a huge draw for visitors from all over the world, generating the kind of excitement that Andy creates on court. I am positive this venture will be a resounding success and we wish the team all the very best.”
ICMI runs a further eight independent properties in Scotland, including Inverlochy Castle near Fort William, Greywalls Hotel in Gullane and The Atholl in Edinburgh.