Emerging category is said to be appealing to young adult drinkers

THERE has been a relative explosion in the range of spirit-flavoured beers available in the Scottish on-trade in recent years. 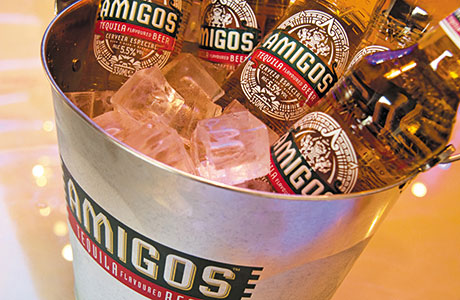 With total beer sales said to be declining among 18 to 24 year olds, could this new sub-category pull younger drinkers back towards beer?
Drinks firms certainly seem to think so.
Simon Green, marketing director at Global Brands, whose portfolio includes bourbon-flavoured Buddy’s and tequila-flavoured Amigos, said spirit beers are “arguably the first radical innovation within beer for a number of years”.
“Consumer tastes have become sweeter and in recent years beer has lost out to flavoured ciders, which have dominated young consumer demand,” said Green. He added that spirit beers were attracting 18-24 year old drinkers who regularly drink fruit ciders.
Andrew Turner of Heineken, which took over distribution of the tequila-flavoured Desperados in 2012, agreed that following an “explosion of new fruit flavours within the cider category”, spirit-flavoured beers have emerged as a response to “consumer demand for new and exciting beer drinking experiences”.
Heineken’s own research predicts spirit-flavoured beer could be worth £400 million to the UK on-trade by 2016; quoting CGA figures, the brewer said the sector is already worth £81m, with value sales growing 85% year-on-year.
As for spirit beers’ target market, it found that 70% of those purchasing Desperados were aged between 18 and 34.
Peter Lord, commercial manager for the Masquerido beer range, which includes Mojito and Tequila variants, said spirit beers are being consumed by “the 18 to 30 market who no longer drink flavoured alcoholic beverages and need a fun long drink [alternative] to the expensive premium vodka cocktail categories”.
Lord said that although the category “is still in its infancy”, spirit-flavoured beers can act as “an introduction for young consumers to the total beer category”.