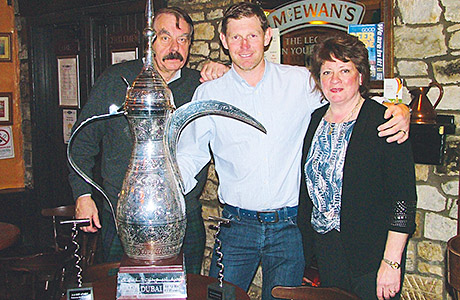 DRINKERS in Linlithgow pub Platform 3 got a real treat earlier this month when golfer Stephen Gallacher popped in, fresh from retaining his title in the Dubai Desert Classic.

Gallacher visited his local, which is the reigning SLTN Community Pub of the Year, with the silverware following his win, which moved him into the top 40 of the world rankings.
And Platform 3 owners Ian and Anne Gibson (pictured left with Gallacher) were quick to show off their own trophies – the SLTN Community Pub of the Year award and the award for Barperson of the Year, which was won by manager Iain Hewitt.
Ian Gibson told SLTN Gallacher’s visit to the pub, which raises money for the Stephen Gallacher Foundation, caused a stir. “Customers were having their picture taken with him; it was brilliant,” he said.