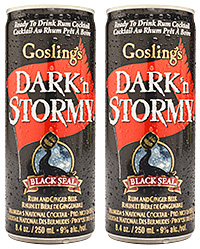 RUM producer Gosling’s has launched a new premixed cocktail in the UK.

A mixture of Gosling’s Black Seal Rum and Gosling’s Stormy Ginger Beer, the Gosling’s Dark ‘n Stormy is available in 250ml cans.
Gosling’s CEO, Malcolm Gosling, said the new product is the “perfect addition” to the company’s portfolio. Prior to its UK launch, the Dark ‘n Stormy was introduced in Gosling’s home market of Bermuda, where it is said to have performed well.
“It was encouraging to hear my fellow Bermudians say that this tastes like a perfectly made Dark ‘n Stormy,” said Gosling. “Sales on the island have been strong.”
The Gosling’s range, which includes Gosling’s Gold Bermuda Rum and Gosling’s Family Reserve Old Rum, is distributed in the UK by Love Drinks.

A category that deserves respect